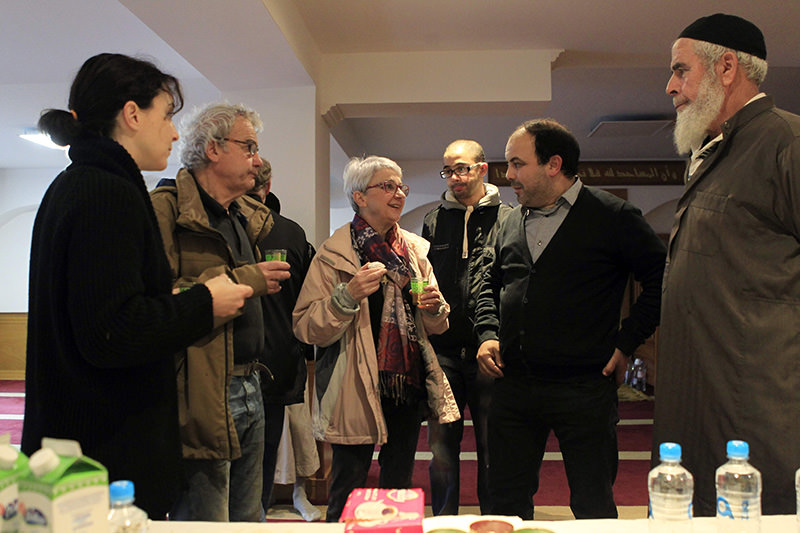 The Ajaccio's mosque which was attacked on December 25, 2015, on the French Mediterranean island of Corsica (AFP Photo)
by Associated Press Jan 09, 2016 12:00 am
Mosques all over France are taking part in a dialogue weekend, opening up to the public as a shaken country marks one year since terrorists attacked a satirical newspaper and a Jewish supermarket, killing 17 people.

The open-door initiative that includes tea and pastries was organized by France's main Muslim body to counter islamophobia and highlight the differences between extremism and moderate, peace-loving Islam.

Nurturing inter-religious cohesion has become a top priority among leaders in France, officially a secular nation, allowing fresh attacks in November. Those attacks led police to conduct over a dozen raids on Muslim places of worship and close several over fears they were radicalizing members.

France has the highest Muslim population of Western Europe.

Muslim leaders hope the move will channel the spirit of the demonstration of January 11., during which millions marched for unity on the streets of Paris.

In other events to mark the first anniversary of January's bloodshed, French President Francois Hollande paid homage Saturday to a female police officer, Clarissa Jean-Philippe, who was killed by gunman Amedy Coulibaly in the Parisian suburb of Montrouge on Jan. 8.

Hollande unveiled a memorial plaque and stood solemnly amid a rousing rendition of the Marseillaise, followed by spontaneous gospel music.

"I am not bitter," said the victim's mother, Marie-Louise Jean-Philippe. She told French media that the "beautiful ceremony... warmed her heart."

In the evening, many will gather for a tribute at a Jewish supermarket in the eastern suburb of Vincennes, the site of a fatal hostage siege by Coulibaly on Jan. 9.
Last Update: Jan 09, 2016 7:26 pm
RELATED TOPICS