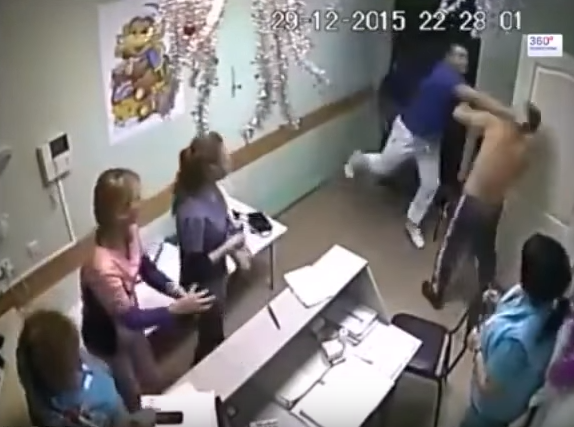 
Russia opened an investigation on Saturday after a hospital doctor was captured on video punching a patient, knocking him to the floor and killing him instantly.

The shocking video of the attack in the southern city of Belgorod was aired repeatedly on state television and went viral on YouTube, while Russian media nicknamed the attacker "the boxer doctor."

The incident raised questions over a cover-up culture in state medicine, with investigators only announcing the probe several days later, after security camera footage was released online and shown on television.

In the video, the strongly-built doctor in medical clothing drags the barechested male patient from the examination table, asking him "why did you touch the nurse?" and pushes him out of the doorway.

When the patient returns, the doctor deals him a single blow to the face and a crash can be heard as the middle-aged man falls backwards onto the floor.

Meanwhile the doctor continues to scuffle with another man accompanying the patient, and it is only minutes later that the medics notice the patient lying motionless and attempt unsuccessfully to revive him.

Belgorod's Investigative Committee said in a statement released Saturday that the incident took place on December 29.

The doctor hit the patient in the face after he "kicked a nurse during a procedure," the investigators said.

"The cause of death of the victim was trauma to the skull and brain from hitting the back of the head on the hard surface of the floor."

Russian media named the doctor as Ilya Zelendinov, a surgeon at the hospital, and the patient as 56-year-old Yevgeny Bakhtin.

Investigators said the doctor was suspected of causing death through negligence, for which he could serve up to two years in jail.

He has been fired from his job but remains free after signing a declaration that he will not travel during the investigation.

Investigators denied any delay, saying they opened a criminal probe the day after the incident, after the hospital reported the death and a post-mortem showed a head injury.

The relatively minor charge reflects the fact there is "no grounds to say that the doctor wanted to murder the patient," investigators said.

"If the victim had stayed on his feet or hit his head on a less hard surface, the consequences would not have been so critical."

Health Minister Veronika Skvortsova has ordered the state health watchdog to carry out a check into the incident, state television reported Saturday.

Russian medics have long operated in a culture of secrecy, with patients having little recourse to compensation for medical errors.

Last year two Russians resorted to taking guns to hospitals and shooting dead doctors for perceived mistakes in their treatment. Both killed themselves at the scene.
Last Update: Jan 09, 2016 8:05 pm
RELATED TOPICS