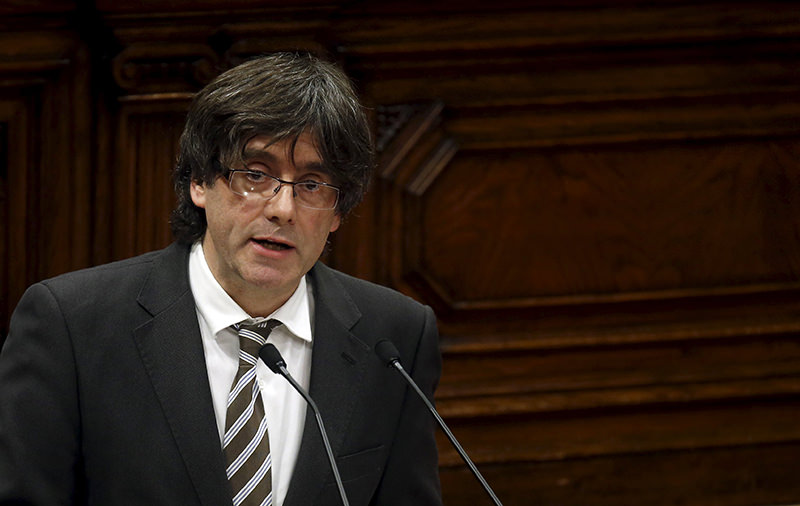 Incoming Catalan President Carles Puigdemont delivers a speech during the investiture session at the Catalunya Parliament in Barcelona, Jan 10, 2016. (REUTERS Photo)
by French Press Agency - AFP Jan 10, 2016 12:00 am
The majority secessionist lawmakers in Catalonia's parliament voted in a new leader Sunday, tasking him with overseeing the wealthy region's breakaway from Spain in a last-minute show of unity after months of bitter infighting.

Carles Puigdemont was elected regional president with 70 votes for, 63 against and two abstentions, giving Catalonia's high-profile independence movement a fresh lease of life and drawing a sharp rebuke from Spanish Prime Minister Mariano Rajoy, who vowed to fight for his country's unity.

"The government won't allow a single act that could harm the unity and sovereignty of Spain," Rajoy warned in a live, televised appearance in Madrid.

After months of acrimony, Catalonia's pro-independence faction that won regional parliamentary elections in September finally came to an agreement this weekend over who should lead the new local government.

The focus of the squabble had been Artur Mas, the incumbent, separatist regional president whom the far-left CUP party -- part of the secessionist faction that won the polls -- rejected over his support for austerity and corruption scandals linked to his party.

And with Mas stubbornly refusing to step aside as a weekend deadline to form a government loomed, Catalonia seemed to be heading for fresh elections, which would have been the fourth since 2010.

But in a surprise move Mas agreed to step aside on Saturday, naming the relatively unknown politician Puigdemont as his successor.

The 53-year-old mayor of Girona -- who comes from a fervently pro-independence family -- will now appoint his cabinet.

"We need... to start the process to set up an independent state in Catalonia," Puigdemont said in a speech to the northeastern region's parliament ahead of the vote.

The last-ditch agreement to form a Catalan government stands in stark contrast to the situation in Madrid, where the national government is in limbo following inconclusive December polls.

Rajoy's conservative Popular Party (PP) came top in the December 20 elections but lost its absolute majority, leaving him struggling to form a coalition government as other parties refuse to support him.

"The (separatist) coalition is profiting from the power vacuum in Madrid," headlined online daily El Espanol on Sunday.

So far the PP's traditional Socialist rivals (PSOE), who came second in the elections, have refused to back him.

But ironically, the newly reached separatist deal may put pressure on the PSOE to stand united with the PP over its opposition to Catalonia breaking away from Spain.

And Fernando Martinez-Maillo of the PP stressed that there was "no better way to confront secessionism than to see the Popular Party and the Socialist party join forces."

One of Spain's 17 semi-autonomous regions with its own language and customs, Catalonia already enjoys a large degree of freedom in education, health and policing.

But fed up after years of demands for greater autonomy on the taxation front -- complaining it pays more to Madrid than it gets back -- the region veered towards separatism.

Polls show most in the 7.5-million-strong region support staging a Scotland-style referendum on independence -- which Rajoy has categorically refused to allow -- but in fact are divided over whether to make the break from Spain.

In November, separatist lawmakers passed a motion in parliament breaking from Spain and calling for complete independence in 18 months.

The move was later ruled illegal by Spain's Constitutional Court, but Catalonia's secessionist lawmakers quickly rose up in defiance, saying the resolution was here to stay.

As week after week passed with no government in sight, however, outsiders began to doubt that the separatists would ever be able to implement their independence plan.

Mas on Sunday attempted to put these doubts to bed.

"In the past few weeks (in Madrid), they were saying enthusiastically that Catalonia was sinking, they were so enthusiastic that they had started to relax," he told members of his CDC party on Sunday.