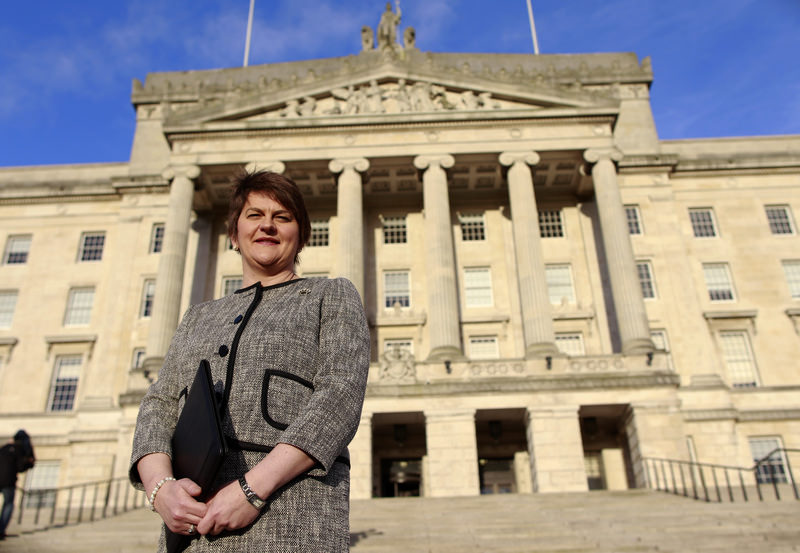 by French Press Agency - AFP Jan 11, 2016 12:00 am
Arlene Foster of the Democratic Unionist Party formally became Northern Ireland's first minister on Monday, taking over from the retiring Peter Robinson ahead of regional elections in May.

Foster, 45, is the first woman and the youngest to hold the most senior political post in Northern Ireland, where power is shared between rival parties in a fragile administration set up to end conflict in the region.

The party she leads wants Northern Ireland to remain part of the United Kingdom.

The 67-year-old Robinson, who had served as first minister since 2008, had announced he would retire last year and Foster had been acting in his place for several months.

"I can think of no greater honour than to have the opportunity to serve my country and the people of Northern Ireland as their first minister," Foster said in her speech in the Northern Ireland Assembly.

A lawyer by profession, Foster recalled growing up in rural Fermanagh at the height of the conflict known as "The Troubles", in which her father was shot and she herself survived a bus bombing as a teenager.

She will work alongside long-serving Deputy First Minister Martin McGuinness of the opposing Sinn Fein party.

She takes power in the wake of a crisis in the assembly, often wracked by disagreement between unionists who support Northern Ireland's position within the United Kingdom, and republicans who want the province to be part of Ireland.

At the height of tensions between the two sides last year, Robinson and most of his DUP colleagues stepped aside from the assembly over concerns that the paramilitary Irish Republican Army still existed 17 years after a landmark 1998 peace deal ended decades of violence.

A co-founder of the DUP, Robinson announced his retirement from frontline politics in November and a deal was reached between the DUP, Sinn Fein and British and Irish governments to resolve problems that had deadlocked the administration.

Foster vowed to work so that the assembly would no longer be "a watchword for arguing and bickering".

"I ask today that we find a new way of doing business, one that places a greater premium on consensus than on conflict," she said.one. We can only do it by working together."
Last Update: Jan 11, 2016 8:44 pm
RELATED TOPICS