Refugees attacked in Cologne amid tension, Merkel under pressure 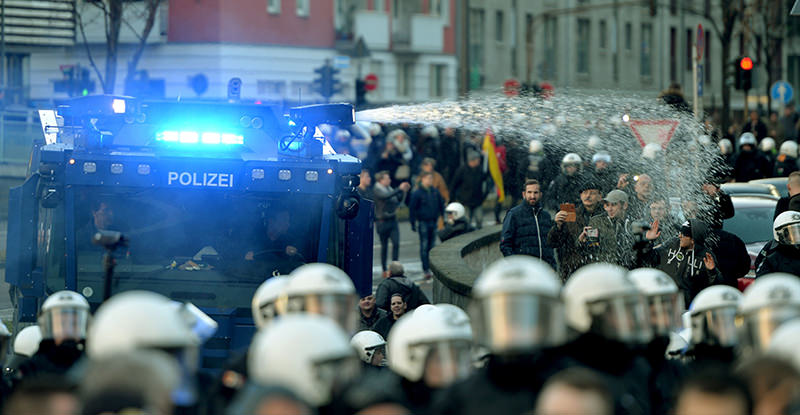 Police use a water cannon in Cologne, western Germany, on January 9, 2016 to clear the rally of the far-right xenophobic PEGIDA movement (AFP Photo)
by Daily Sabah with Wires Jan 11, 2016 12:00 am

Tensions remains high over the Cologne New Year’s Eve assaults as refugees remain under more pressure with several migrants being attacked by a group of around 20 people. More far-right rallies are expected to be held in Germany over the incident

A group of Pakistanis and a Syrian were attacked in Cologne amid tensions over New Year's Eve assaults in the city that have been blamed largely on foreigners, police said on Monday.

Six Pakistani nationals were attacked Sunday by a group of around 20 people and two of them were briefly admitted to a hospital, police said. Also Sunday evening, a Syrian man was attacked by five people. He was injured but didn't need treatment. Police said they received tips Sunday afternoon about groups of people who would "seek provocation," but were still investigating whether the subsequent attacks were racially motivated and whether there was any link to the New Year's assaults.

The Deutsche Well cited Cologne tabloid Express as saying a group of "bikers, hooligans and bouncers" used Facebook for a "human hunt" plan.

Those assaults have stoked tensions over Germany's open-door policy in the refugee crisis and prompted politicians to call for tougher laws against migrants who commit crimes.

Cologne police said 516 criminal complaints have now been filed with them in connection to the New Year's attacks. About 40 percent involve allegations of sexual offenses. German authorities said on Monday that nearly all the suspects in the New Year's Eve violence mainly against women in Cologne were "of foreign origin," as they released initial findings of a criminal probe. "Witness accounts and the report by the [local] police as well as findings by the federal police indicate that nearly all the people who committed these crimes were of foreign origin," Ralf Jaeger, interior minister of North Rhine-Westphalia state, told reporters.

German Justice Minister Heiko Maas believes that the attacks on women in Cologne on New Year's Eve were organized, according to comments in Sunday's edition of the Bild newspaper. "When such a horde meets to commit crimes, it seems to have been planned in some way. Nobody can tell me that it wasn't coordinated or pre-prepared," Maas was quoted in the popular tabloid as saying.

Maas was also not prepared to rule out a connection between the Cologne attacks and those on women in other German cities on the same night. "All links must be very carefully examined. The suspicion seems likely that a certain date and the number of people to be expected were selected," he told Bild. Maas was echoing comments he had made earlier in the week.

At the same time Maas warned people not to draw conclusions about how law-abiding migrants are from the attacks, after a police report said the suspects were mostly asylum seekers or people living in Germany illegally.

"To infer from someone's background that he is more likely to commit a crime or not I find to be risky," he said. He also said it was totally wrong to make any connection between the excesses of New Year's Eve in Cologne and the arrival of over 1 million refugees in Germany in 2015. "Of course there are among the more than 1 million people those who commit crimes, but there is no indication that the number of crimes has risen disproportionately since the influx," he said.

In the aftermath of mass sexual assault, far-right protests erupted in Cologne during the weekend, where hundreds of PEGIDA supporters waved German flags and signs saying "Rapefugees not welcome," as they shouted: "Merkel raus" (Merkel out). The rattle of a helicopter circling in the sky and the occasional bang of a firecracker added to tensions as counter-protesters, separated from the PEGIDA crowd by police, chanted "Nazis raus." A sister group of the xenophobic PEGIDA movement was set to hold another rally on Monday in the eastern city of Leipzig.

With thousands of asylum seekers still streaming into Germany every day, Merkel has come under fire from critics, even within her own conservative alliance, who want her to put a cap on the number of refugees in the country. Critics have questioned Germany's ability to integrate the unprecedented number of newcomers, many of whom hail from Syria, Iraq and Afghanistan. In the face of outrage over the Cologne violence, Merkel has taken a tough line against convicted refugees. She has signaled her backing for changes to the law to ease expulsion rules, with officials within her ruling coalition expected to swiftly negotiate the proposals this week.

Recently, European countries have witnessed a shift toward far-right, anti-migrant parties, which have been gaining popularity amid rising public fears regarding the migrant influx. Polls showed a rise in support for right-wing parties in Austria, Poland and Switzerland. Similarly, anti-migrant and anti-Islam movements such as PEGIDA have been on the rise.