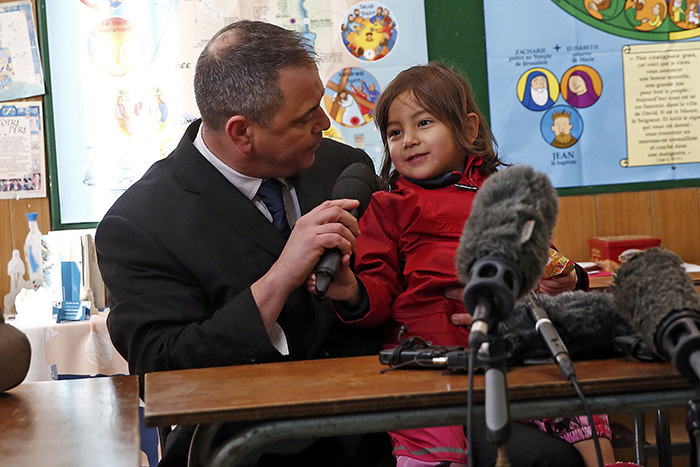 Ex-soldier Rob Lawrie attends a news conference with Afghani girl Bahar Ahmadi, known as Bru, in Boulogne-sur-Mer, France, January 14, 2016 (Reuters Photo)
by Associated Press Jan 14, 2016 12:00 am
A French court must decide whether a British man who went on trial Thursday is a smuggler or a hero after he tried to spirit a 4-year-old Afghan girl from a squalid migrant camp in the French city of Calais to family members in Britain.

Just before the trial, Rob Lawrie appeared with the girl in his arms at a news conference in northern France, pleading for understanding of what he acknowledged was "an irrational choice."

Lawrie's case epitomizes the clash between the heart and the law amid Europe's record-breaking migrant influx. The 49-year-old faces charges of aiding and abetting illegal immigration. If convicted in his one-day trial, he faces a maximum prison term of five years and a 30,000-euro ($32,000) fine.

"What you're looking at here is a waste of life. She's living in a refugee camp," Lawrie told reporters as young Bahar Ahmadi smiled timidly for the cameras. "People call it smuggling ... I was rescuing the little girl."

He agreed, however, that his decision was misguided.

Lawrie, a former carpet-cleaner and soldier from the Leeds area, had been helping migrants as a volunteer when he was caught Oct. 24 by French border police with Bahar Ahmadi tucked away with her teddy bear in a cache in his van.

Two Eritrean migrants had also slipped into the back of Lawrie's vehicle, but Lawrie said he knew nothing about them and police believed him. They are not part of the case.

Ahmadi had been living with her father in the Calais camp, which is mired in mud and now home to at least 4,200 migrants trying to sneak into Britain. It is the biggest of several migrant camps that have sprung up in northern France.

Lawrie testified through a translator at the trial in Boulogne-sur-Mer. Presiding Judge Louis Betermiez pressed Lawrie on whether he was hiding the child, then asked whether he was compromising her safety.

Prosecutor Jean-Pierre Valensi has asked the court to convict Lawrie of endangering the life of another if it does not retain the more serious smuggling charge. Endangering would draw a 1,000-euro ($1,100) fine.

Citing the police report, he said Lawrie told police about the child in his vehicle 2 1/2 hours after being stopped at the Calais port over the two Eritreans. "He was conscious of the disgraceful conditions," he said to loud boos in the courtroom. "I estimate her life was in danger" in the small closed cache, the prosecutor said.

Bahar and her dad, Reza Ahmadi, were in the courtroom, too.

Asked before the trial how he would react if sent to jail, Lawrie replied: "If I go to jail today ... I will take it on the chin."

Lawrie stresses he took no money to transport Bahar across the English Channel.

"I had told her father 'no' many times," Lawrie said in an interview last week with The Associated Press at his house in Guiseley, 210 miles (335 kilometers) north of London. "But half past 10 one rainy night, when she fell asleep on my knee as I was leaving for the ferry, I just couldn't leave her there anymore. All rational thought left my head."

Lawrie is among hundreds of volunteers helping migrants amid a surge of people fleeing the war in Syria, violence in Afghanistan or poverty in Africa.

Lawrie, with four children of his own, said his passion to help was awakened in September after seeing the photo of 3-year-old Aylan Kurdi washed up on a Turkish beach. He raised funds for migrants, traveled to Calais to help them build up the camp. He became so involved that his wife has since left him.

French authorities are trying to crack down on smuggling and deter immigrants from risking the journey, but critics say they are also targeting migrant helpers.

A retired university lecturer, Claire Marsol, transported two Eritreans in France illegally from the Nice train station to another nearby train station. She was convicted in December by a court in Grasse of aiding their travel and fined 1,500 euros ($1,639).