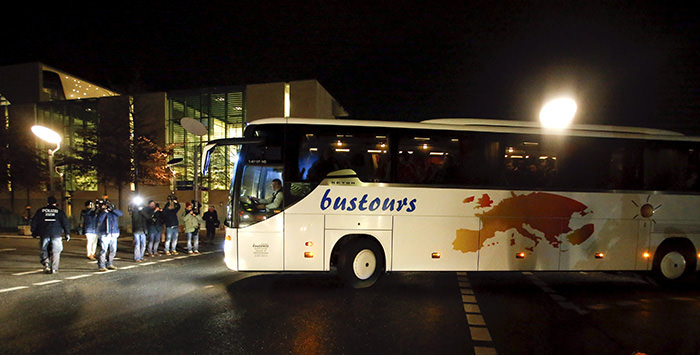 A bus with refugees from the Bavarian town of Landshut leaves the Chancellery building in Berlin, Germany, January 14, 2016 (Reuters Photo)
by Associated Press Jan 15, 2016 12:00 am
A bus carrying 31 Syrian refugees arrived from southern Germany in Berlin on Thursday night as a district councilor in Bavaria followed up on his pledge to Chancellor Angela Merkel that he'd send refugees her way if his district could no longer provide accommodation for them.

The act came amid ongoing concerns about how Germany will deal with the 1.1 million asylum-seekers that flooded in last year. Peter Dreier, a Landshut district councilor, said he wanted to "send a sign that refugee policy cannot continue like this."

Dreier said he had talked with Merkel on the phone last year. He said he warned her that Landshut was reaching its capacity for housing asylum-seekers and told her he'd put refugees on buses to Berlin if his district could no longer handle the influx.

The bus arrived shortly after 6 p.m. (1700 GMT) in front of Merkel's chancellery in the center of Berlin. Several police officers shielded the 31 refugees from reporters as officials asked them to board another bus waiting nearby that was to take them to local shelters. However, the refugees refused to leave the bus and after a two-hour wait in front of the chancellery, the bus left for an overnight accommodation.

Merkel's spokesman Steffen Seibert said in a statement that the city of Berlin had agreed to offer accommodation for the refugees for their first night in Berlin.

Both German news channel n-tv and Zeit newspaper's online edition reported their reporters had talked to refugees during the ride to Berlin and that the migrants didn't know the trip had been organized as an act to criticize Merkel's refugee policy.

The refugees thought of the trip to the German capital as an opportunity and were upset when they found out they had been used by Landshut politicians to make a stance against the federal government's policy, both outlets reported.

Landshut spokesman Elmar Stoettner told The Associated Press earlier on Thursday that all 31 refugees on the bus had been granted asylum in Germany and volunteered to participate in the bus trip.

Stoettner also said that some have relatives in the German capital and others would probably "go back to Bavaria if in Berlin they say that they don't want them."

Countering the district councilor's criticism of the government's refugee policy, Seibert said in the statement, that while the government is aware of the fact that the high number of refugees is a challenge for the communities, it also supports them financially in handling the refugee crisis.

The federal government has also pledged to provide more than 1 billion euros (1.08 billion dollars) annually until 2019 for social housing, Seibert pointed out.

District councilor Dreier said in a statement that the 66 migrant homes in his district are full and that in addition to the asylum-seekers, about 450 people who have received asylum are also still living there because they can't find apartments.

Most migrants who arrive in Germany first set foot in Bavaria, and cities and communities there, as well as elsewhere across the country, have been struggling for months to provide accommodation for them.
Last Update: Jan 15, 2016 6:13 pm
RELATED TOPICS