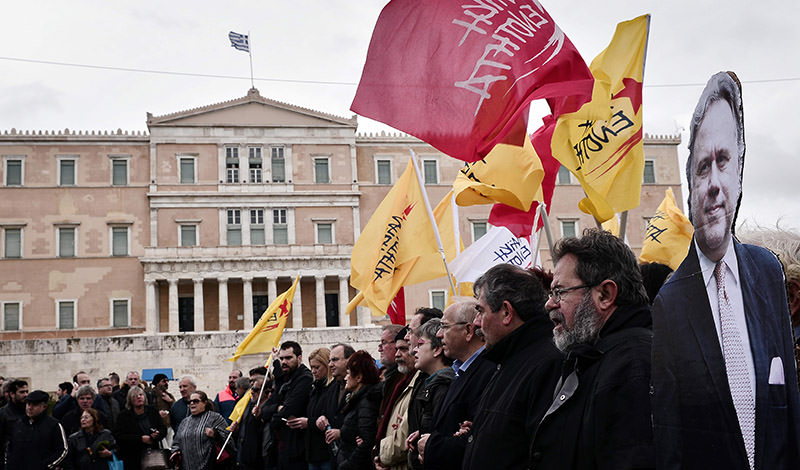 About 3,000 public and private sector workers, pensioners and students rallied outside parliament. They held banners reading "You cannot bargain with social security" and chanted "Your hands off our pensions!"

"We will fight to protect our rights and force the government to withdraw this monstrous plan that it calls a reform," the secretary-general of the private sector union GSEE, Nikos Kioutsoukis, told Reuters.

Turnout in recent protests has been weak, mainly due to austerity fatigue and resignation after five years of belt-tightening and two bailouts that have shut businesses and pushed up unemployment but have not pulled Greece out of crisis.

On Feb. 4, labour unions will stage a 24-hour general strike against the planned reform, the third such walkout in three months. Turnout will indicate the level of resistance the government faces as it pushes through unpopular measures.

This week lawyers staged one of their biggest rallies in recent years. They have threatened to step up labour action and farmers are also preparing pension protests.

Prime Minister Alexis Tsipras was first elected a year ago promising to end austerity. After tough negotiations, he signed up to a third bailout in July and was re-elected in September on a mandate to implement it while protecting the vulnerable.

Greece's first bailout review is expected to officially begin next week. The lenders currently see a fiscal gap of well over 1.5 percent of GDP for 2016, according to sources close to the talks, and expect tough talks on pension reform.

"We will defend what is non-negotiable for us," Labour Minister George Katrougalos told Greek Skai TV, referring to pension cuts. Economy Minister George Stathakis told the Real News newspaper he expected a compromise to be reached.

The government, which has a slim parliamentary majority, has sought broad political support for the reforms it needs to legislate to pass the review and start talks on debt relief.

As part of the bailout and to appease angry voters, Tsipras has also vowed to go after tax dodgers and fight corruption, which many Greeks blame for the country's fiscal woes.

On Saturday, he met Norbert-Walter Borjans, finance minister of the German state of North Rhine-Westphalia, which has given Athens details of accounts held by Greeks in Switzerland.

"We're determined to fight tax evasion and your information and help are critical," Tsipras told Borjans.