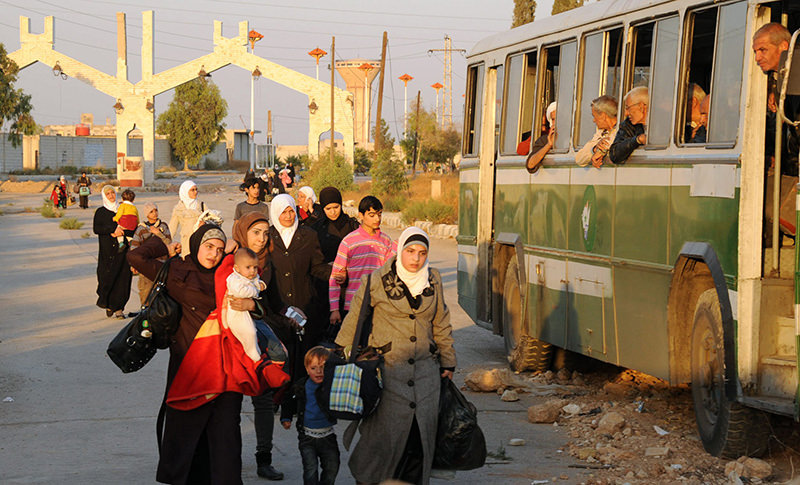 A handout picture released by the official Syrian Arab News Agency (SANA) on October 12, 2013 shows Syrian women and children arriving to be evacuated by Syria's Red Crescent from a Damascus suburb (AFP Photo)
by Compiled from Wire Services Jan 18, 2016 12:00 am
Britain will fund English language classes for Muslim women refugees in hopes that building community cohesion will help fight extremism.

Prime Minister David Cameron says the 20 million pound ($28.5 million) fund will help tens of thousands of women facing social isolation and discrimination. Writing Monday in the Times, Cameron says it is time to end the "passive tolerance" of discriminatory practices and says that language skills will be taken into account on visa applications.

Cameron says Britain will never truly build one nation "unless we are more assertive about our liberal values, more clear about the expectations we place on those who come to live here and ... generous in the work we do to break down barriers."

Some 190,000 Muslim women in England speak little or no English.

Shuja Shafi, secretary general of the Muslim Council of Britain, offered a cautious welcome to the 20 million pound ($28.5 million) scheme. He said Cameron was "absolutely right" to want English to be taught more widely.

"But the prime minister's aim to have English more widely spoken and for better integration falls at the first hurdle if he is to link it to security and single out Muslim women to illustrate his point," Shafi said.

"Muslims are only one third of the minority population. Reports suggest a significant proportion of immigrants from Eastern Europe struggle with English."