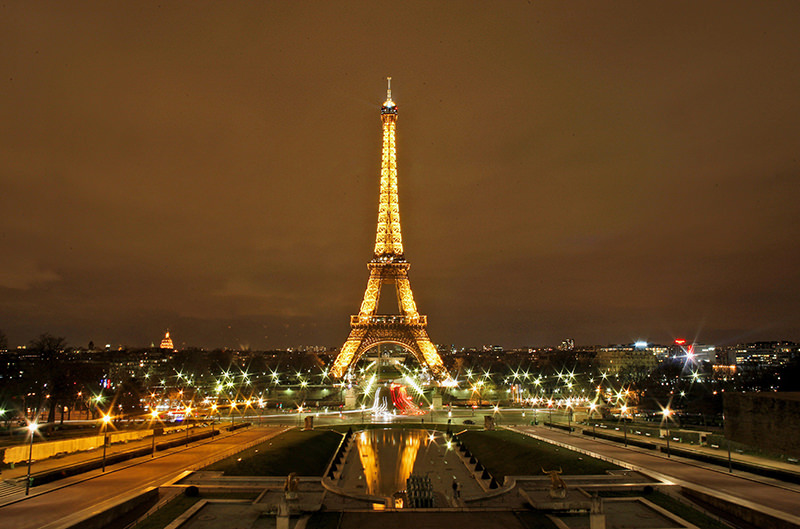 The Eiffel Tower is seen from the Trocadero in Paris, France, Thursday, March 12, 2009. (AP Photo)
by Compiled from Wire Services Jan 19, 2016 12:00 am
The Eiffel Tower, one of the world's top tourist draws, saw visitor numbers drop after the devastating terror attack on the French capital in November, figures showed on Tuesday.

The Iron Lady of Paris received 6.91 million visitors in 2015 compared with 7.1 million in 2014, according to the company that runs the 126-year-old monument.

"Before the tragic events hit the capital in November, visits were up one per cent," the company SETE said in a statement.

Gunmen and suicide bombers acting in the name of the Daesh terrorist group attacked cafes, restaurants, a concert hall and the national stadium on November 13, leaving 130 dead.

Management said visitors "hesitated" for about two weeks after the attack, a period during which the tower closed for two days and then partially opened for two days.

The Eiffel Tower, built in 1889 for the Exposition Universelle, was lit up in the blue, white and red of the French flag after the November attack.

According to SETE some 80 per cent of visitors are foreigners, mainly from the United States and Canada, followed by those from Britain, Spain and Italy.

Another business casualty of the November attacks is the famous Paris restaurant Au Pied de Cochon, which has decided to close four nights a week after seeing receipts plunge 20 per cent.

The restaurant by Les Halles - site of the former legendary food market nicknamed the "stomach of Paris" - had been open around the clock since 1947.

The deadly attacks have also cost French hoteliers an estimated 270 million euros (S$421 million) in lost revenue and could continue to have an impact on hotel occupancy rates, research firm MKG Group said on Tuesday.

The hospitality research firm said the sector was still suffering in January but there was some prospect of a recovery from mid-February, provided there are no more incidents.

Improving economic conditions, the Euro 2016 soccer tournament to be held in France in June and trade fairs, should help hotel room demand this year, it added.

"We estimate the revenue shortfall for the French hotel industry at 270 million euros, of which 146 million was for Paris alone," Mr Vanguelis Panayotis, director of development at MKG, told reporters.

The attacks have sent shudders through the tourism industry in one of the world's most visited cities, with hotel owners, tour operators and others in the industry hoping the expected drop-off in visitors will not last long.

In December, the chief executive of AccorHotels, said that Europe's largest hotel group had felt a "real economic impact"from the attacks, with fewer last-minute bookings for the second half of December compared with a year ago and that the effect will probably last three or four months.

France, which has been struggling to revive its economy, is the most-visited country in the world, with Paris hosting 32.2 million visitors last year.

Overall French hotel occupancy rates fell by 0.3 percentage points in France to 65.4 per cent in 2015, while RevPAR (revenue per available room) rose 0.1 per cent.