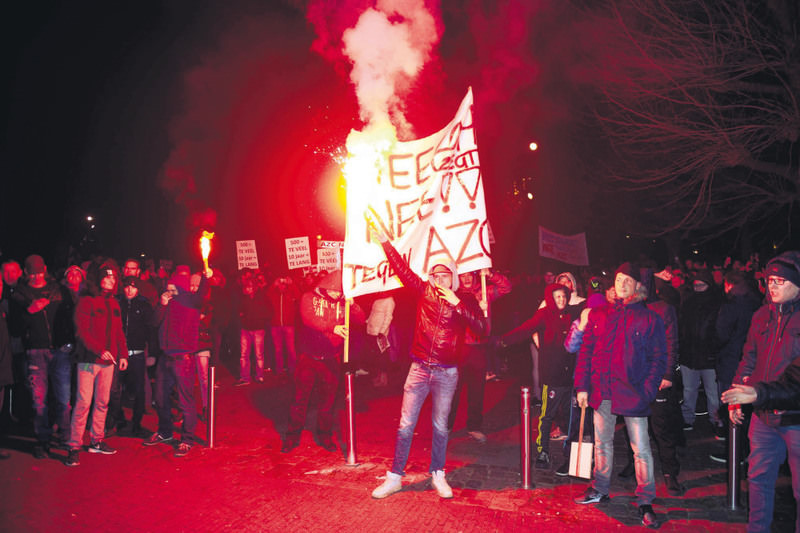 Protesters during a march against plans to open a refugee center for 500 migrants in Heesch, the Netherlands.
by Daily Sabah with Wires Jan 20, 2016 12:00 am

Clashes erupted late Monday in a small Dutch town during violent protests against the planned opening of a center for asylum seekers, Dutch media and officials said.

In a repeat of scenes previously seen in several Dutch towns and villages late last year amid growing tensions over the record numbers of migrants flowing into the region, police intervened and dispersed about 1,000 people who rallied in central Heesch. Dutch police said yesterday they arrested three protesters the previous night at a demonstration against a town's plan to build a center for asylum-seekers.

The riot came just hours after the populist, far-right politician Geert Wilders called for all male refugees from Islamic countries to be kept locked up in asylum centers, saying such a move was needed to protect Dutch women after the New Year's Eve assaults in Cologne, Germany.

A Facebook page titled, "Protest AZC Heesch" -- which gained over 3,000 likes -- had called for supporters to join a rally at 7:00 p.m. (6:00 GMT) outside the town hall in Heesch. "AZC" is Dutch shorthand for an asylum seekers center.

Town officials had previously aimed to hold a public meeting around 8:00 p.m. (7:00 GMT) to discuss plans to house some 500 refugees in the town over the next ten years. But the atmosphere turned nasty, and the meeting was abandoned as dozens of protesters tried to storm the town hall, the Dutch news agency ANP said. A group of protesters threw fireworks and eggs at the building which was evacuated, according to sources. A message posted on the town's website from the mayor, Marieke Moorman, said that the town "had given police extra powers" after a "demonstration ran out of control." Police restored calm later that evening.

There have been several other outbreaks of violence as Dutch officials have sought to explain the country's migrant policy.

Europe is grappling with its biggest influx of refugees since World War II with more than 1 million people inundating its shores, fleeing the conflicts in Syria and Iraq as well as the poverty in African countries. But the crisis has polarized the opinions of citizens in the Netherlands, where a record 54,000 asylum seekers had already sought refuge by mid-November.

Fueling the debate, Wilders said in a new video for his Freedom Party (PVV) on Monday that "I propose that we lock the male asylum seekers up in the asylum centers." His party is riding high in popular opinion, with the latest polls suggesting that if elections were held today the party would snatch up the largest bulk of seats in the Lower House -- 36 out of 150 -- enough to force talks about building a coalition government.

Europe has been witnessing a shift towards right-wing parties, which have been gaining popularity amid rising public fears regarding the refugee influx. Recently, the polls indicated a rise in support for right-wing parties in France, Austria, Poland and Switzerland. Several European leaders have drawn criticism for their remarks, accused of xenophobia and racism. Slovak Prime Minister Robert Fico pointed to Muslims in his country as a potential threat and said his government was "monitoring" its community in the wake of the Paris attacks on Nov. 13 last year. In January, Fico sparked criticism when he said that Slovakia would prefer to accept Christian refugees under the resettlement plan.

Hungarian PM Viktor Orban also said that EU migrant quotas would spread terrorism across Europe as parliament prepared a legal challenge against the quota regime. "Mandatory resettlement quotas are dangerous because they would spread terrorism across Europe," Orban said. Recently, Czech President Milos Zeman, known for his fiery anti-migrant comments, said on Sunday that it was almost impossible to integrate the Muslim community into European society. "Let them have their culture in their countries and not take it to Europe, otherwise it will end up like Cologne," he added, referring to the mass New Year's Eve assaults on women in Germany and elsewhere. Late last year, Zeman called the surge in refugee numbers "an organized invasion," urging young men from Iraq and Syria to "take up arms" against DAESH instead of running away.

America has been witnessing anti-immigrant sentiment as well, which has become more apparent since U.S. Republican candidate Donald Trump called for a ban on all Muslims from entering to the U.S. Since then, a large number of U.S. governors have also threatened to bar Syrian refugees from their states following the deadly attacks in Paris.