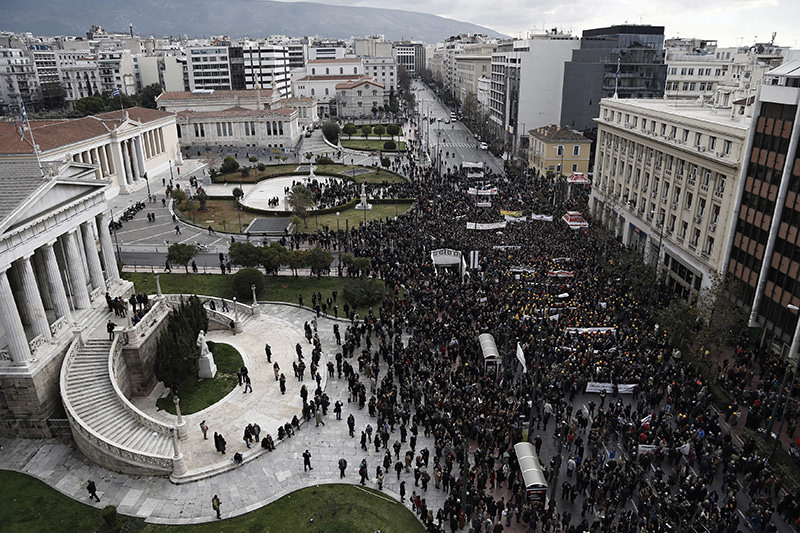 by German Press Agency - DPA Jan 21, 2016 12:00 am
Greek farmers were blocking key access roads with their tractors Thursday as protests against planned pension cuts and tax rises spread across the country.

The route connecting western Greece with Turkey was obstructed, while further road blocks were due to go up in northern and central Greece later in the day, farmers said on Greek television.

Sailors meanwhile continued a 48-hour strike with most ferries staying put in the harbor. Rail traffic slowed down due to rail workers going on strike.

In Athens and other cities lawyers, engineers, notaries, general managers, pharmacists, doctors and other self-employed people took to the streets to protest against the pension reforms. Police estimate that in Athens alone they numbered 6,000.

Greek media have dubbed the protests an "uprising of the tie wearers." During the demonstrations, legal professionals draped their ties on a tree in central Athens by way of protest in scenes carried by state television.

Nationwide strikes are expected to hit the public sector on February 4.

The government of Prime Minister Alexis Tsipras is under pressure to implement pension reforms as a precondition for further financial aid of 86 billion euros (93 billion dollars) from the country's creditors. Among the planned measures are cuts averaging 15 per cent for new pensions.
Last Update: Jan 21, 2016 5:16 pm
RELATED TOPICS