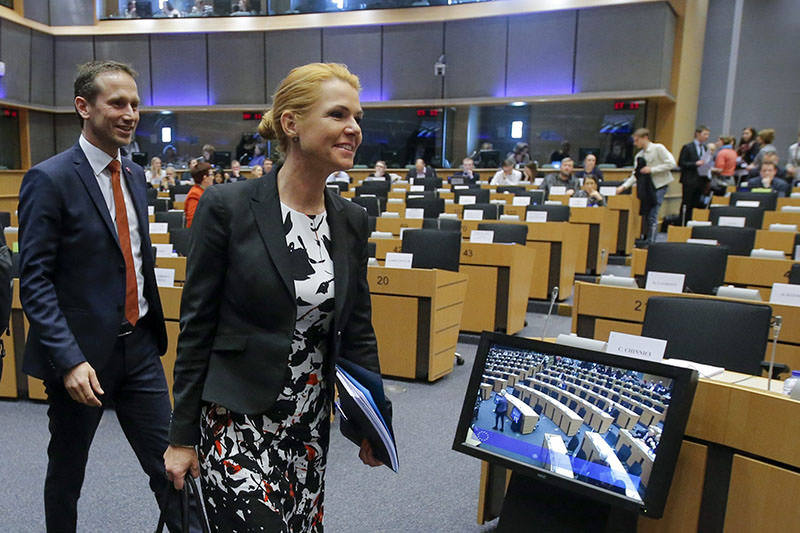 Danish FM Jensen (L), Danish Integration Minister Stojberg (R) during news conference ahead to hearing by EPu2019s civil liberties committee, in Brussels, 25 Jan 2016 (EPA)
by Anadolu Agency Jan 25, 2016 12:00 am
Danish ministers have defended their country's plans to pass a draft law allowing authorities to confiscate valuables of refugees while they process their asylum.

Speaking at the European Parliament in Brussels on Monday, Danish Foreign Minister Kristian Jensen with Immigration, Integration and Housing Minister Inger Stojberg held a debate with European lawmakers concerning the draft Danish law, which is expected to be passed on Tuesday in the Danish Parliament.

"We hope to help those who cannot manage for themselves [but] it is also a fundamental principle that those who can manage themselves will not get help from the state," Stojberg told the European Parliament.

Under the draft law, dubbed the "jewelry law" by Danish media, authorities can seize assets of refugees to pay for their food and lodging.

Asylum seekers are required to tell the Danish authorities to what extent they are bringing assets with them to the country.

Danish police will also be allowed to search and inspect the asylum seekers' bags. However, possessions of personal value such as engagement rings are exempt from being confiscated, the Danish ministers said.

Asylum seekers will also be allowed to hold on to possessions worth no more than 10,000 Danish krone ($1,450).

"Objects with higher value will be taken to cover up for the costs," Stojberg said, calling 10,000 krone a "fair limit".

The move has been criticized as inciting xenophobia and even compared to Nazis confiscating belongings from the Jews during the Holocaust.
But Danish authorities have refuted the comparison, saying similar rules apply for Danish citizens.

The law will also require asylum seekers who arrive without their relatives to wait for at least three years before they can be united with their family members.