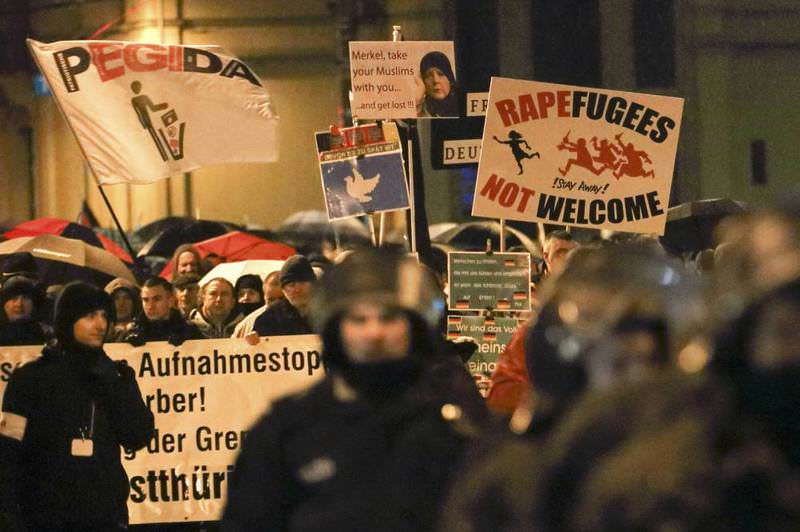 Members of LEGIDA, the Leipzig arm of the anti-Islam movement PEGIDA, take part in a rally in Leipzig, Germany on Jan. 11.
by Daily Sabah with Wires
Jan 25, 2016 12:00 am

Amid an unprecedented rise in hate crimes against Muslims and migrants in Europe, the anti-Islamic, xenophobic group PEGIDA said it will organize Europe-wide rallies in 14 European countries next week

Germany's Islamophobic and anti-foreigner movement PEGIDA on Saturday met with representatives of like-minded groups from 14 European countries in the Czech city of Roztoky to plan Europe-wide demonstrations for Feb. 6. Rallies against "the Islamization" of Europe will take place on Feb. 6 in 14 European countries including the Czech Republic, Estonia, Finland, Germany, Poland, Slovakia and Switzerland, the far-right organizers said on Saturday.

The demonstrations are being organized by the anti-foreigner German group PEGIDA, an acronym for "Patriotic Europeans Against the Islamisation of the Occident." Tatjana Festerling of PEGIDA made the announcement on Saturday following a meeting with like-minded groups in Roztoky, near Prague. "The fight against the Islamization of Europe is our common objective," Festerling said in a statement after the meeting. Festerling also said the German government was demonstrating to other European Union countries what could go wrong when a country opens its doors to migrants. "Merkel is growing a massive surplus of men in Germany," Festerling said, referring to the fact that most of the 1.1 million migrants that entered Germany in 2015 were male.

The Roztoky meeting was organized by the Czech group "Bloc Against Islam" whose leader, Martin Konvicka, called Europe's policy on migrants "stupid and suicidal." "Our basic message will be [that] Europeans won't give up Europe," Konvicka said in reference to the protests the right-wing groups are planning to hold in Warsaw, Prague, Dresden and other cities.

PEGIDA was established in October 2014 as a xenophobic Facebook group, initially drawing just a few hundred protesters to demonstrations in the eastern city of Dresden before gaining strength, peaking with turnouts of 25,000 people. It gained momentum as the effects of an ongoing influx of refugees into the country were becoming clear. Far-right anti-Islamic groups have become more prominent in Germany, like the PEGIDA-inspired KOEGIDA in Cologne, and HAGIDA in Hamburg.

Interest subsequently began to wane following overtly racist comments by founder Lutz Bachmann and the surfacing of "selfies" in which he sported a Hitler-style moustache and hairstyle. The group has seen a revival with the record influx of migrants to Germany in 2015, followed by a wave of sex assaults on and robberies of women in Cologne on New Year's Eve blamed on young men from Arabic- speaking countries.

Meanwhile, German Interior Minister Thomas de Maiziere announced yesterday that while Germany is still taking in around 2,000 refugees a day, it is now denying entry to about 200 others daily at its borders. "People who are fleeing war and persecution are offered security and protection in Germany," de Maiziere told the newspaper Bild am Sonntag. "But that also means that those who do not seek this protection from us are refused entry at the border."

Several European countries have witnessed a spike in Islamophobia and anti-migrant sentiment, especially after an unprecedented influx of refugees, who are mostly Syrians fleeing war and violence. Europe's populist right also rushed to demand an end to the influx of refugees from the Middle East in the wake of the attacks. According to the French Interior Ministry, hate crimes against Muslims in France tripled last year while anti-Semitic assaults remained at an already "high level" and attacks on Christian sites rose by a fifth. Similarly, reports of hate crimes against Muslims in London have tripled in the weeks following the Nov. 13 Paris attacks, according to police figures released in December 2015. The attacks, which were motivated by anti-Islamic bias, included arson attacks on mosques, anti-Islamic graffiti on walls, vandalism and threatening phone calls to Islamic organizations.

The United States has been witnessing anti-immigrant sentiment as well, which has become more apparent since U.S. Republican presidential candidate Donald Trump called for a ban on all Muslims who want to enter the U.S. Since then, a large number of U.S. governors have also threatened to bar Syrian refugees from their states following the deadly attacks in Paris.