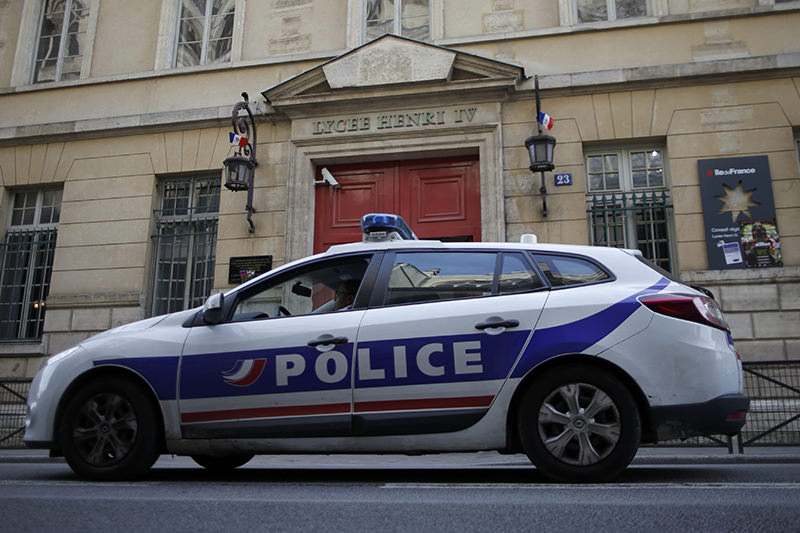 5 high schools received a bomb threat by telephone around mid-morning, in Paris, January 26, 2016. (REUTERS Photo)
by Daily Sabah with AFP Jan 26, 2016 12:00 am
Six prestigious schools in central Paris and 14 schools in Britain were evacuated on Tuesday following hoax bomb threats.

The Paris schools received practically identical calls between 10:20am (0920 GMT) and 11:20am, French police said.

Students at Charlemagne, Fenelon, Montaigne, Condorcet, Henri IV and Louis le Grand schools, all in up-market districts of the French capital, were moved to secure areas while police carried out searches.

The alerts were lifted for all six schools by the end of the afternoon.

"Four schools across London this morning all reported receiving calls claiming suspicious devices had been left in their premises," a Scotland Yard spokesman told AFP.

"They were evacuated as a precaution. The premises were searched. Once those were completed the incidents were stood down and they are being treated as malicious communications."

All four were evacuated but by 9:00am (0900 GMT), "there was quickly found to be no threat and no risk to any children or staff. Enquiries are continuing into the matter".

"They mirror the hoaxes several schools received just a few days ago.

"Local police officers have been sent to the affected schools to carry our checks and to offer reassurance.


"A police investigation is under way to find the person responsible."

However, UK daily The Telegraph and Daily Mail reported Tuesday that a Russian group of Putin-sympathizers, who also support the Assad regime, claimed responsibility for the threats via tweets.

The group, which called themselves 'Evacuators 2K16', invited students to get in touch if they wanted to 'get out of school'.

With a Twitter profile picture of Vladimir Putin and a ".ru" domain name, some of the group's tweets said: 'Schools in Paris dropping like flies', and 'How's the West Midlands doing?'.

The group with the Twitter handle @Ev4cuati0nSquad has been shut down and is being investigated.