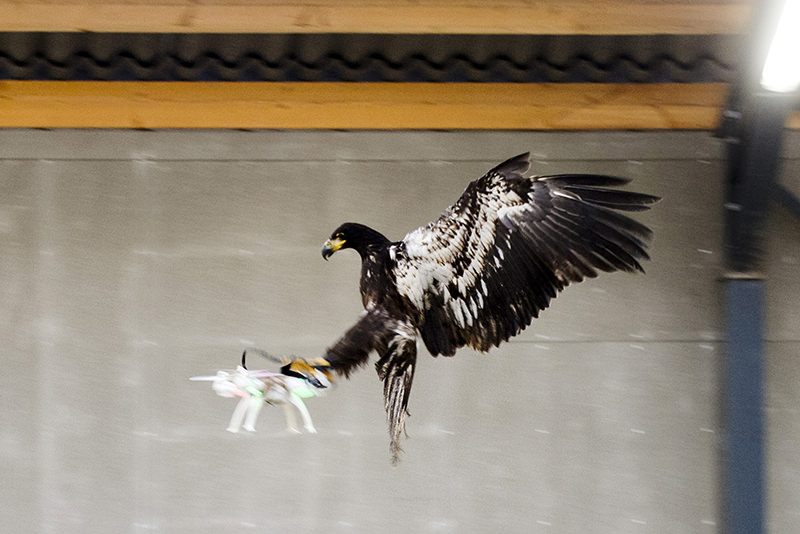 An eagle is seen gliding straight toward a drone before clutching it and dragging it to the ground in Rotterdam, Netherlands January 29, 2016. (REUTERS Photo)
by Feb 02, 2016 12:00 am
Dutch police puzzling over how to remove drones that pose a public safety threat are testing a way to get the job done in one fell swoop - with trained eagles.

"It's a low-tech solution to a high-tech problem," spokesman Dennis Janus of the country's national police said.

The idea arose because amateur use of drones has boomed and police have begun to worry about unlicensed drones flying into off-limit spaces around airports or above public events such as politician's appearances.

Possible solutions the Dutch police have studied include shooting nets at the offending drones, remotely hacking them to seize their controls - or taking them out with birds of prey.

"People sometimes think it's a hoax, but it's proving very effective so far," Janus said.

Showing off the technique in a video released by police, a four-propeller drone hovers in the middle of a warehouse, colored lights flashing.

Released by her keeper, a white-tailed eagle glides straight toward the drone, clutches it easily in her talons - clack! - and drags it to the ground.

Sjoerd Hoogendoorn of "Guard from Above", the company working with police to develop the concept, said the birds must be trained to recognize the drones as prey.

They are rewarded with a piece of meat after each successful foray.

Their scaly talons are strong and tough enough to seize most consumer-grade drones without injury from the blades, he said.

"These birds are used to meeting resistance from animals they hunt in the wild, and they don't seem to have much trouble with the drones," he said.

The potential impact on the animals' welfare is subject of testing by an external scientific research institute.

"The real problem we have is that they destroy a lot of drones," Hoogendoorn said. "It's a major cost of testing."

Another unknown is how the birds will fare in a crowd situation, he said.

A decision by police on whether to move ahead with using the eagles is expected by the end of the year.