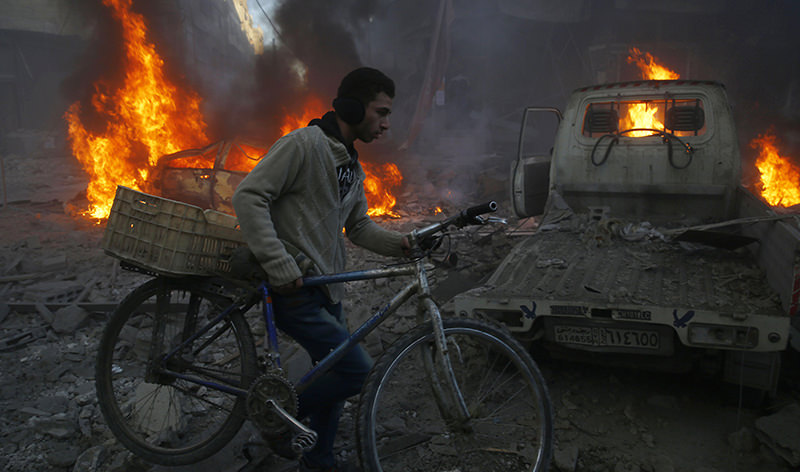 A man carries his bicycle past debris and burning cars following reported airstrikes in the town of Hamouria, Syria (AFP Photo)
by Anadolu Agency Feb 02, 2016 12:00 am
Russia's history on human rights has been strongly criticized in a report released by a rights watchdog on Tuesday.

"Russia caused the death of millions of people due to its forced exile, assimilation and occupation policies," claimed a report from the International Center for Watching Violation of Rights.

'Violation Report of Russia' discusses the country's role in the Syrian crisis, as well as military operations in Georgia and Crimea.

"Russia has a lengthy record of human rights violations," Mustafa Demiral, Director of Legal Affairs at the center, said on Tuesday.

"Syria, especially, has turned into a table where the global powers are playing arm-wrestling," he added.

The report says Russia "together with Iran and China -- which are the other supporters of the [Assad] regime" is responsible for the war in Syria which has resulted in hundreds of thousands of deaths.

"During the operations performed since Oct. 2015, thousands of Syrian civilians died even though it has been argued that armed elements are targeted," the report reads.

The document, critical on Russia's foreign policy, claims "to test the accuracy of expressions [by] states which assert to be representatives of civilization, peace and freedoms".

"The unfair structure of the United Nations underlie most of today's problems across the world," Demiral added. "The five permanent members of UN Security Council always have the final say - a system which has created continuous problems.

"This should be turned into a fair system."

"Unfortunately, as Russia is one of those permanent members and has the right of veto, the unfair and cruel practices of Russia cannot be prevented through the UN," Demiral complains.

The permanent members of the UN Security Council include China, France, Russia, the United Kingdom and the United States. This setup has been criticized by Turkish President Recep Tayyip Erdoğan as being unrepresentative of all continents, ethnicities and religions.