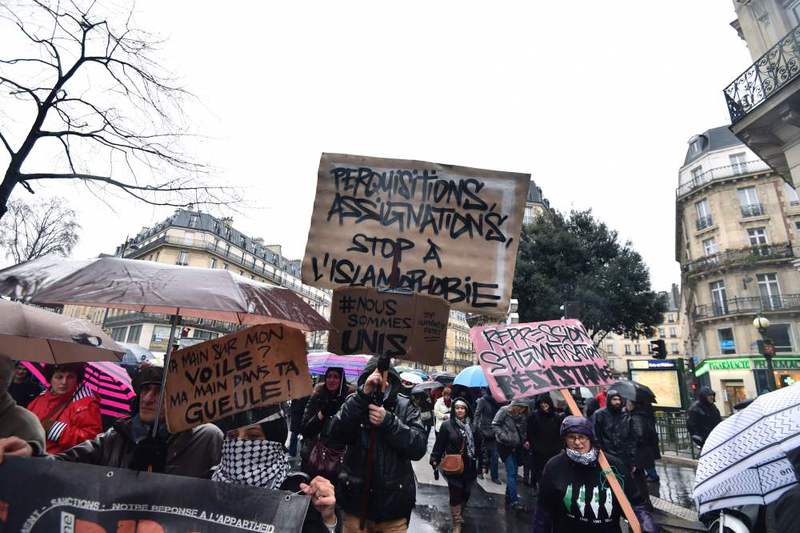 People holding placards reading ,Searches, summons, stop to the Islamophobia, take part in a demonstration on Jan. 30 in Paris.
by Daily Sabah with Wires Feb 05, 2016 12:00 am

Two rights groups, Amnesty International and Human Rights Watch, accused French police of physical and psychological abuse against Muslims under the state of emergency, which may extend over another three months

France has carried out "abusive and discriminatory raids and house arrests against Muslims" under its current state of emergency, trampling on the rights of those targeted, including hundreds of children and the elderly, human rights groups said.

Human Rights Watch (HRW) and Amnesty International published two separate research studies on Wednesday, suggesting French police apply harsh measures with little explanation and sometimes apply excessive force under the state of emergency. A day after the attacks in and around Paris that left 130 people dead on Nov. 13 and was claimed by DAESH, the French government declared a state of emergency, which was scheduled to expire on Feb. 26. However, the government on Wednesday said it will ask parliament to renew the state of emergency for another three months. "The terrorist threat is still extremely high" in France and Europe, government spokesman Stephane Le Foll said Wednesday. "The state of emergency is necessary. It has been useful and must continue to be."

HRW said they interviewed 18 people who were reportedly subjected to abusive searches, as well as activists and lawyers in affected areas. Those targeted told HRW that the French police "burst into homes, restaurants, or mosques; broke people's belongings; terrified children; and placed restrictions on people's movements so severe that they lost income or suffered physically." HRW cited Izza Leghtas, its Western Europe researcher, as saying, "France has a responsibility to ensure public safety and try to prevent further attacks, but the police have used their new emergency powers in abusive, discriminatory, and unjustified ways."

In one case, HRW said police broke four of a disabled man's teeth and then realized he wasn't the person they were looking for.

The group urges the government to ensure that "people have prompt access to remedies for any damage caused by police action during any renewed state of emergency, and should carry out meaningful outreach about these remedies to targeted communities." It added that judicial authorization should always be part of raids and searches.

"In a context of growing Islamophobia, the French government should urgently reach out to Muslims and give them assurances that they are not under suspicion because of their religion or ethnicity," Leghtas said.

The state of emergency expands police powers to carry out arrests and searches without prior judicial approval and allows authorities to forbid the movement of persons and vehicles at specific times and places. Another government bill also presented Wednesday would allow officers to use their weapons to "neutralize someone who has just committed one or several murders and is likely to repeat these crimes."

The proposals would also make it easier for police to carry out raids at night, and searches of luggage and vehicles near "sensitive" sites and buildings. In total 3,289 police raids have been carried out under the state of emergency that led to 571 judicial investigations mostly for drugs or possession of unauthorized weapons, the Associated Press reported. French law enforcement officials also placed between 350 and 400 people under house arrest.

Meanwhile, Amnesty International said most of the 60 people it interviewed said that police applied harsh measures with little or no explanation and sometimes excessive force. Several people told Amnesty International that "the stigma of being searched had caused them to lose their jobs."

Amnesty International's Director for Europe and Central Asia John Dalhuisen said, "While governments can use exceptional measures in exceptional circumstances, they must do so with caution. The reality we have seen in France is that sweeping executive powers, with few checks on their use, have generated a range of human rights violations. It is difficult to see how the French authorities can possibly argue that they represent a proportionate response to the threats they face."

Amnesty said emergency measures have had a significant impact on the human rights of those targeted. While some have already lost their jobs, almost all were left with stress and anxiety. People also accused emergency powers of implementing measures in a discriminatory manner, mostly targeting Muslims.

"If there are allegations against one or two people, why don't they target them specifically? Why do they target a whole community? There are about 350 Muslims in Lagny who are now left with no place to worship," the president of the mosque and three organizations dissolved by the authorities told Amnesty International.

Several human rights groups are opposed to the extension of the state of emergency. Thousands of people marched in Paris Saturday to protest it. Amnesty International stressed that "the state of emergency cannot be a permanent solution without undermining fundamental freedoms."

"We must not give up on our rights and freedom", France's Human Rights League said in a written statement.

Even though several NGOs and political figures emphasized that Muslims and refugees should not face backlash because of attacks by DAESH, Islamophobia and xenophobia have long been on the rise in European countries. European attitudes toward minorities living in the EU show that there are considerable negative perceptions of minorities. Europe's populist right also rushed to demand an end to an influx of refugees from the Middle East in the wake of the attacks. France is home to the largest Muslim population in Europe, estimated at between 5-6 million. The French Muslim community represents approximately 7 percent of the total population that live in France.
RELATED TOPICS