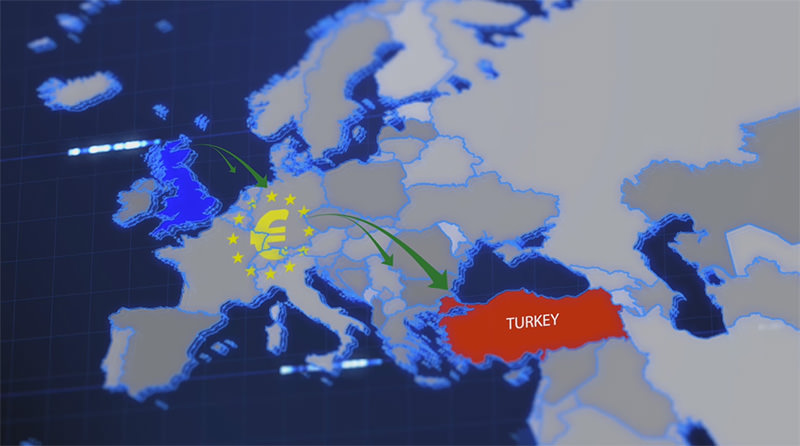 by Anadolu Agency Feb 06, 2016 12:00 am
Scenes showing the Turkish flag, Istanbul's Grand Bazaar and boats buzzing across the Bosporus were transmitted to millions of British television viewers on Wednesday night.

But it was not the latest advertising spot by Turkey's tourist board. It was a warning against Turkish membership of the European Union-coming in the form of a propaganda broadcast by the U.K. Independence Party (UKIP), a right-wing group that took nearly four million votes in last year's parliamentary election.

The broadcast contained extensive footage of mosques and women wearing headscarves before urging viewers to vote against Britain's continued membership of the E.U. in the country's forthcoming referendum.

One Turkish Cypriot parliamentarian has described it as "blatant racism trying to whip up Islamophobic hate crime".

It prompted dozens of complaints to Britain's broadcast regulator in the hours after it was televised. But some have asked how it was allowed on air in the first place.

The broadcast features a single presenter, Alexandra Phillips, who is portrayed as a television news reporter as she tells viewers that "as many as 15 million migrants" could move to Europe if Turkey becomes an EU member.

Phillips, UKIP's head of media, shows viewers a series of graphics demonstrating how Turkey would receive large sums from the EU's aid budget. She also says-incorrectly-that a quarter of Turkish girls are married before they turn 18 and that Turkish state education is not free, without offering sources for the claims.

Wednesday's segment was one of UKIP's party political broadcasts, an entitlement to show between two and four minutes of party propaganda during peak viewing hours.

It was shown on both the main BBC channel and ITV, its largest commercial rival. The BBC1 showing was between the evening news bulletin and 'The One Show', a magazine program that according to the Broadcasters Audience Research Board attracts between three and four million viewers a night.

Britain's broadcasting laws appear to permit parties to broadcast inaccurate and potentially offensive information to millions of viewers.
"The content of party political broadcasts is a matter for the political parties," a spokesman for the BBC told Anadolu Agency.

"The broadcasters-BBC and ITV-have no say in the content, beyond their responsibility for making sure PPBs are compliant with relevant broadcasting regulations and the law," the BBC added.

But Britain's Liberal Democrat party believes UKIP deliberately crafted their broadcast to resemble a news report-which it says infringes the guidelines for party propaganda on televisions.

"This is a clear attempt to portray the presenter as a journalist, who a viewer would reasonably believe to be impartial on a genuine news program on the BBC or ITV," the party wrote in its complaint to Ofcom.

Under British broadcasting rules, news programs are required to be accurate and impartial. This does not apply to political broadcasts by parties, although offensive broadcasts are still prohibited.

For Meral Hussein-Ece, a Turkish Cypriot member of the House of Lords, the broadcast was "blatant racism trying to whip up Islamophobic hate crime".

"They're using Turkey to whip up fear. It's insulting, given what Turkey is doing to help the Syrian refugees and keep them out of Europe."

A Labour member of parliament, Joan Ryan, told Anadolu Agency she was "appalled" by UKIP's broadcast.

"It is offensive, Islamophobic and deeply divisive. Nigel Farage [UKIP's leader] should be ashamed of himself," she said.

Ryan is a member of parliament for the North London district of Enfield, home to the largest number of Turkish-speaking people in Britain.

"I am very proud to represent a constituency which has such strong and vibrant Turkish and Turkish-speaking communities. They have made an immense contribution to our society and way of life, both in Enfield and around the U.K.," she said.

By Friday, Britain's broadcast regulator Ofcom had received 35 complaints arguing the segment was racially offensive towards Islam and Turkey.

An Ofcom spokesman said: "We will assess these complaints before deciding whether to investigate or not."

Anadolu Agency made several attempts to ask the UK Independence Party for comment on the accuracy of its party political broadcast and whether it considered its content offensive. It had received no response by Friday evening.
Last Update: Feb 06, 2016 11:50 am
RELATED TOPICS