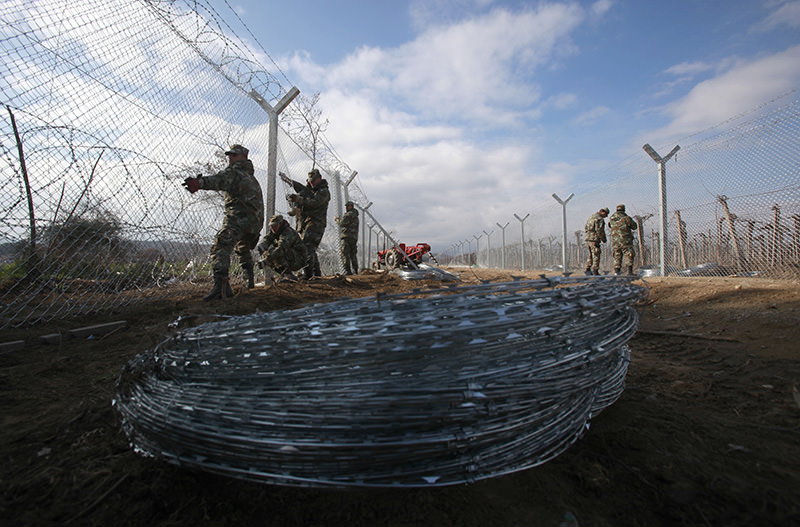 Macedonian army soldiers erect second fence on border line with Greece, near southern Macedonia's town of Gevgelija, Feb. 8, 2016. (AP)
by Feb 08, 2016 12:00 am
Macedonia has begun building a new razor-wire fence parallel to an existing one on its border with Greece to make it harder for illegal migrants to enter the Balkan country, an army official said Monday.

Since November only refugees from Syria, Afghanistan and Iraq have been allowed to cross the border on their journey to Western Europe, but migrants from other countries have still tried to get across.

"The idea is to send a message to migrants that there is a double fence so give up crossing illegally," a senior army official who requested anonymity told AFP.

The new fence will be at a distance of five meters (16 feet) from the one erected in November on both sides of the border crossing for refugees at Gevgelija, he said.

The official refused to say how long the new fence would be, but local media reported that it would stretch for more than 30 kilometers (19 miles) along the frontier.

More than 68,000 refugees have been registered entering Macedonia since the beginning of the year, and police say they stopped about 4,000 people trying to cross illegally in January alone.

Streams of people fleeing conflict or poverty continue to make the often perilous journey from Turkey across the Mediterranean and through the Balkans, despite cold winter weather, in the hope of starting new lives in more prosperous European countries.