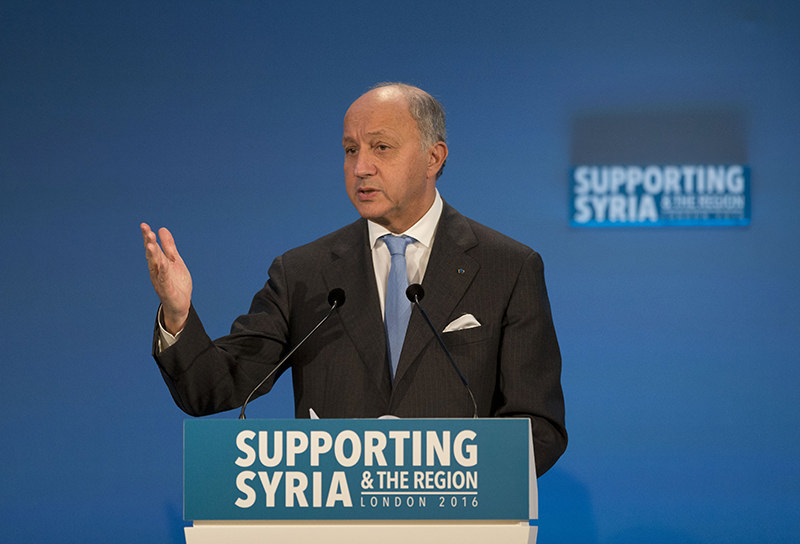 French FM Laurent Fabius makes a pledge during the 'Supporting Syria and the Region' conference, Feb. 4, 2016. (AP Photo)
by Feb 10, 2016 12:00 am
Veteran French politician Laurent Fabius bowed out of government Wednesday after a career spanning more than three decades that saw an early string of scandals but ended with him shepherding a complex climate deal as foreign minister.

And he didn't leave quietly, lashing out at Russia and Iran for "complicity" in the "brutality" of Bashar Assad's regime and criticizing the United States for a lack of commitment to resolving the Syrian war.

Fabius holds the distinction of being France's youngest-ever prime minister, a post he took up at 37, and has remained a Socialist heavyweight, ending his career in the ornate hallways of the Quai d'Orsay as his country's top diplomat.

He was given a standing ovation by lawmakers from his Socialist Party and even those on the right applauded him as he spoke in the National Assembly.

His departure came after President Francois Hollande nominated him to head France's prestigious Constitutional Court, a post Fabius said he would take up in March "if things go as planned".

A wider cabinet reshuffle is expected this week.

Amiable and sometimes witty in person, the cerebral 69-year-old also has a reputation for being aloof.

Nevertheless, his experience made him a popular foreign minister with the French people, who largely saw him as a fitting representative abroad.

He and Hollande were longtime political enemies, but managed to put their rivalry behind them once Hollande became president in 2012 and appointed him foreign minister.

Segolene Royal, the high-profile environment minister and Hollande's former partner, is among Fabius's rumoured successors, but former prime minister Jean-Marc Ayrault is also believed to be in the frame.

Fabius helped to negotiate the Iran nuclear deal, as well as dealing with the thorny dossiers of the Ukraine and Syria conflict, and the growing threat of jihadism in western Africa, where French troops are deployed.

However, it is his final big project that is likely to shape his legacy: sealing a historic deal to save mankind from global warning.

As host of the global climate talks at the end of 2015, he presided over 13 days of gruelling talks to get 195 nations to agree on transforming the energy system underlying the world economy.

While fending off rumours of ill health -- and a persistent suggestion that he suffered from Parkinson's -- Fabius threw himself into the world of climate science and politics for two years before the talks.

He will stay on as president of the UN climate talks process for the next few months.

Fabius, who comes from a long line of art merchants, is independently wealthy and is known for beautifully cut suits -- Hermes, according to one report. He has often been labelled a member of the so-called "gauche caviar".

However, Fabius would quickly face a major scandal, when French agents were caught after the sinking of the Greenpeace ship Rainbow Warrior in New Zealand as it was on its way to protest against a French nuclear test.

After initial government denials, Fabius later told journalists the French secret service was indeed behind the bombing, adding: "The truth of this affair is cruel."

The biggest stain on his career was a scandal in the 1980s in which blood infected with HIV was distributed in France, and later abroad, even after the government became aware of the problem.

Hundreds were infected, and Fabius was charged with manslaughter, but acquitted in 1999. His health minister was convicted but never punished.

In more recent times, it is his 34-year-old son Thomas who has caused Fabius the most embarrassment.

Thomas Fabius has faced a raft of legal problems over his passion for gambling and is wanted in the United States for allegedly writing rubber cheques for millions of dollars at several Las Vegas casinos.
Last Update: Feb 10, 2016 7:28 pm
RELATED TOPICS