Poland to join anti-Daesh efforts in return for NATO assistance 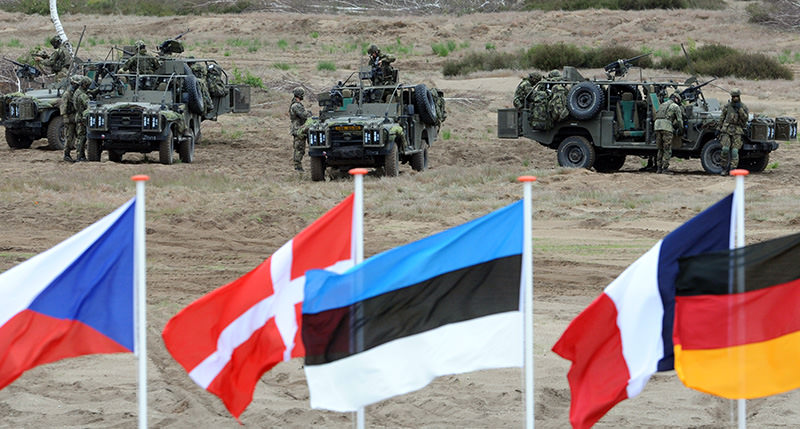 n this June 18, 2015,file photo flags wave in front of soldiers who take positions with their army vehicles during the NATO Noble Jump exercise on a training range near Swietoszow Zagan, Poland (AP Photo)
by Feb 10, 2016 12:00 am
Poland will join the fight against Daesh, its defence minister said on Wednesday, though he signalled that the scale of its involvement would depend on NATO's response to Russia's renewed assertiveness on the alliance's eastern flank.

The announcement, made by Defence Minister Antoni Macierewicz after a meeting with U.S. Defense Secretary Ash Carter in Brussels, confirmed an earlier Reuters report that Poland would boost its Middle East involvement in an attempt to convince its allies to shift NATO forces eastwards.

"Poland has joined the actions, which are now so crucial, on NATO's southern flank," Macierewicz told reporters.

"When it comes to details ... we will continue to discuss it, particularly as we consider it in the broad context of NATO's situation, hoping that both the U.S. and NATO as a whole will back Poland and other countries on the eastern flank with their ... permanent presence."

Alarmed by Russia's annexation of Ukraine's Crimea peninsula in 2014 and its support for armed separatists in eastern Ukraine, Poland hopes NATO will agree at a summit in Warsaw in July to send more troops to former communist eastern Europe.

NATO agreed on Wednesday its boldest steps yet to deter Russia from any attack in the Baltics or elsewhere in eastern Europe, setting out ways to rapidly deploy air, naval and ground forces without resorting to Cold War-era military bases.

The United States and its allies are bombing Daesh targets in Syria and Iraq, where the militant group occupies swathes of territory.

Poland's contribution to the campaign against Daesh could involve reconnaissance and training, Macierewicz said.

NATO defence ministers are meeting in Brussels on Wednesday and Thursday in preparation for the Warsaw summit.