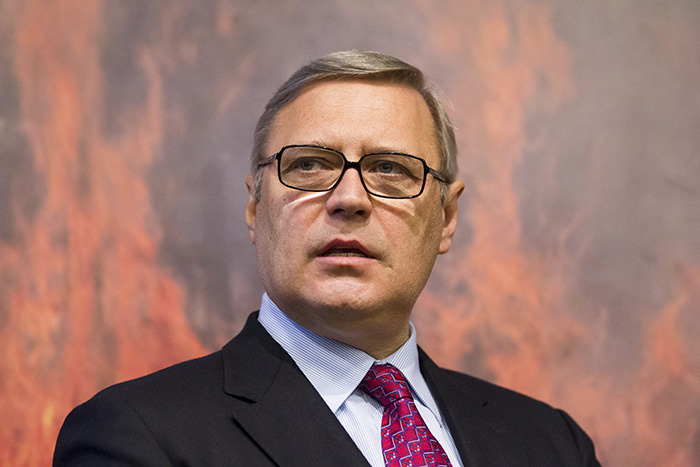 Russian opposition figure, former Russian Prime Minister Mikhail Kasyanov (AP Photo)
by Compiled from Wire Services Feb 10, 2016 12:00 am
Opposition leader Mikhail Kasyanov said a group of men burst into a Moscow restaurant where he was dining on Tuesday night and threatened him, days after an ally of Vladimir Putin issued a video showing him in the cross-hairs of a sniper's rifle.

Kasyanov, who filed a police complaint saying his life and safety had been threatened, is a fierce critic of Putin. Kasyanov's liberal opposition Parnas party is planning to contest parliamentary elections later this year.

"In a restaurant in the centre of Moscow about 10 unidentified men of a non-Slavish appearance threw a cake at me and shouted threats at me after which they got away in their cars," Kasyanov said in a statement.

Mikhail Kasyanov told the Russian news agency Interfax that about 10 men of "non-Slavic appearance" entered a Moscow restaurant where he was dining Tuesday night and slammed a cake in his face. Kasyanov, who is chairman of the opposition "PARNAS" party, said the men also shouted insults.

Other threats recently made to Kasyanov cast the event in a darker light.

Earlier this year, Ramzan Kadyrov, the leader of Russia's Chechnya republic, called Russian opposition figures "enemies of the people" and later posted a video on Instagram that shows Kasyanov in the bull's eye of a rifle.
Last Update: Feb 10, 2016 10:53 am
RELATED TOPICS