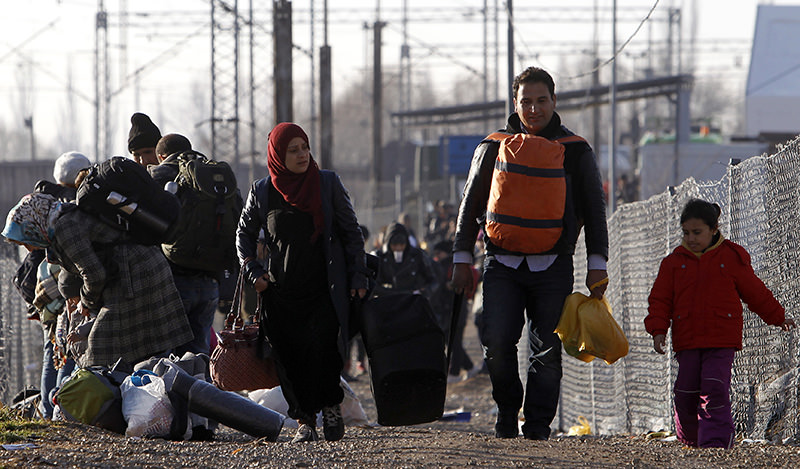 Refugees walk towards the border with Serbia from the transit center for refugees near northern Macedonian village of Tabanovce, Feb. 12, 2016. (AP)
by Feb 12, 2016 12:00 am
EU member states on Friday gave Greece a three-month ultimatum to remedy "deficiencies" in controlling the influx of refugees or face border controls with the rest of the Schengen passport-free zone, EU sources said.

The decision taken by ministers over Greek objections is the culmination of weeks of pressure on Greece, the main gateway for the one million refugees and migrants who entered Europe last year in the continent's biggest such crisis since World War II.

A report last month from the European Commission, the EU executive, found that Greece was failing to properly register and fingerprint migrants when inspections were carried out at the Turkish land border and several islands in the Aegean Sea last November.

"It is of utmost importance that Greece addresses the issues identified in the report adopted by the Commission as a matter of priority and urgency," EU ministers said in the recommendation that two EU sources said was adopted Friday.

The document spelled out that Greece "within one month ... establish an action plan to remedy the deficiencies... (and) within three months of the same date, it shall report on the implementation."

If Greece fails to remedy the problems by mid-May, Brussels could authorize other member states to exceptionally extend border controls within the EU's cherished Schengen area, including with Greece, for up to two years, instead of the normal six months. ;

Such a scenario is outlined under article 26 of the Schengen border code.

Germany, which along with other member states introduced such border controls late last year, on Thursday extended the measures until May, the limit under current Schengen provisions.
Last Update: Feb 12, 2016 5:06 pm
RELATED TOPICS