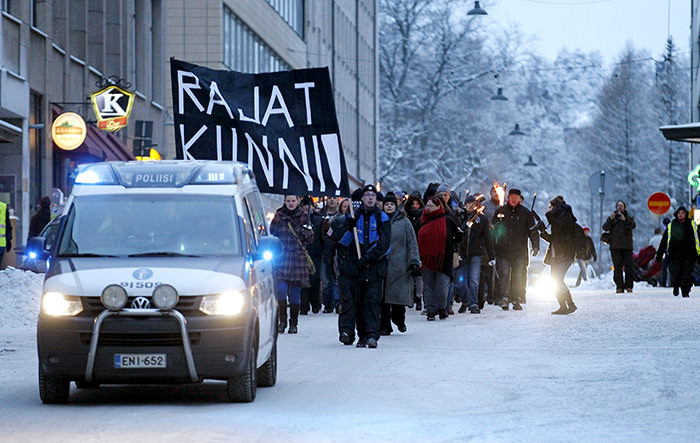 Anti-immigration marchers are led by a police van on the streets in Tampere, Finland January 23, 2016 (Reuters Photo)
by Feb 12, 2016 12:00 am
Thousands of Iraqi refugees who arrived in Finland last year have decided to cancel their asylum applications and to return home voluntarily, citing family issues and disappointment with life in the frosty Nordic country.

Europe is in the grip of its worst migrant crisis since World War Two, with more than a million people arriving last year, fleeing wars and poverty in the Middle East and beyond.

Germany and Finland's neighbor Sweden have taken in many of the migrants but Finland too saw the number of asylum seekers increase nearly tenfold in 2015 to 32,500 from 3,600 in 2014.

Almost two thirds of the asylum seekers last year were young Iraqi men, but some are now having second thoughts, so Finland will begin chartering flights to Baghdad from next week to take them home.

Officials said about 4,100 asylum seekers had so far cancelled their applications and that number was likely to reach 5,000 in the coming months.

"My baby boy is sick, I need to get back home," said Alsaedi Hussein, buying a flight back to Baghdad at a small travel agency in Helsinki.

Somalia-born Muhiadin Hassan who runs the travel agency said he was now selling 15 to 20 flights to Baghdad every day.

"It's been busy here for the past few months," he said.

A majority of the home-bound migrants have told immigration services they want to return to their families, but some expressed disappointment with life in Finland.

"Some say the conditions in Finland and the lengthy asylum process did not meet their expectations, or what they had been told by the people they paid for their travel," said Tobias van Treeck, programme officer at the International Organization for Migration (IOM).

Echoing that comment, travel agent Hassan said: "Some say they don't like the food here, it's too cold or they don't feel welcome in Finland. There are many reasons."

Nearly 80 percent of the migrants returning home are Iraqis. Just 22 of the 877 Syrians - whose country is racked by civil war - and 35 of the 5,214 Afghans who sought asylum in Finland last year have asked to return to their home country.

Along with other Nordic states, Finland has recently tightened its immigration policies, for example requiring working-age asylum seekers to do some unpaid work.

Hostility to migrants has also increased in Finland, a country with little experience of mass immigration and which now has economic problems.

Germany too, which took in 1.1 million people in 2015, has seen small numbers of Iraqi refugees choosing to go home.

Finland had been preparing to reject up to 20,000 asylum seekers from 2015, but the number of voluntary returnees could significantly reduce that figure.

"The number of returnees is increasing steadily ... All asylum seekers are informed about the options for voluntary return and about the available financial assistance," said Paivi Nerg, a senior official in the Finnish interior ministry.

However, most Iraqi returnees pay for their own flight home or seek help from Iraq's embassy in Helsinki, she added.

Last year the Finnish government and the IOM provided financial help to 631 returnees and a similar number is expected this year.

The charter flights will carry up to 100 passengers back to Baghdad from Helsinki every week for as long as demand lasts, officials said.