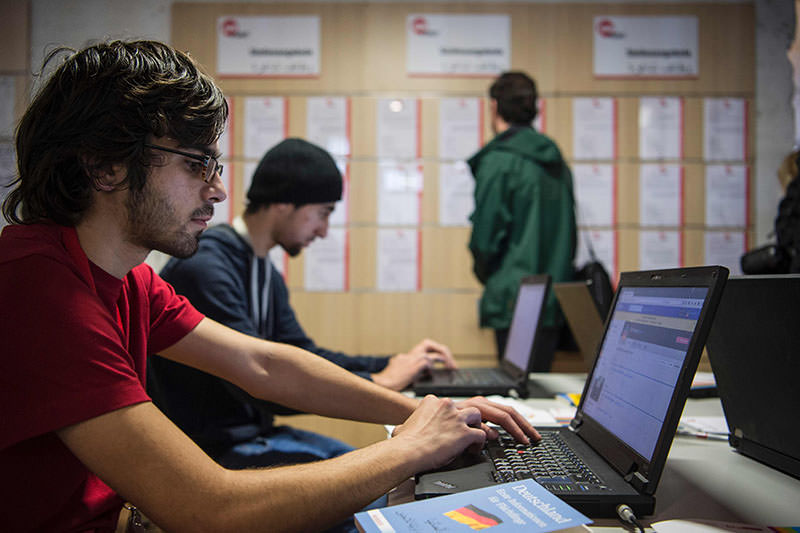 Volunteer sits in front of a computer during the inauguration of a new jobs counseling center for refugees in Berlin, on Jan 27, 2016. (AFP)
by Associated Press Feb 13, 2016 12:00 am
Antonio Piani appears to have beaten the odds stacked against refugees finding work in Europe, but the hotel where he works was set up specifically to employ people like him.

The 40-year-old says the janitor's job is his first permanent position since leaving Iran more than 11 years ago a disheartening message for the hundreds of thousands of new arrivals seeking work in Austria, Germany, Sweden and the few other prosperous EU countries willing to take them.

"It's bound to get more difficult," said Piani, an Iranian Christian who changed his name to Antonio when he was baptized. "Refugee numbers are increasing and so is the sentiment that they are taking jobs from the locals."

Nearly 40 percent of those unemployed in Austria were classified as migrants or of a migrant background, according to statistics cited in April by Volkshilfe, Austria's largest NGO dedicated to helping the underprivileged. In Sweden, official figures released Thursday found that 38 percent of the 386,000 registered as unemployed were non-European migrants. And German Labor Office figures from last month show a more than 60-percent rise in the number of non-European migrants without a job over the year.

And numbers are only half the story.

Biases in hiring, lack of documents from passports to diplomas, and legal status needed to obtain a job, provide significant hurdles to refugees looking for employment.

In Austria, fears are being magnified by rising unemployment, and the more than 30,000 new arrivals looking for jobs this year have helped hoist the xenophobic Freedom Party to topping popularity polls. But the job-stealing refugee is only one of the perceptions that make finding a job difficult.

Type-casting refugees as qualified for only the most menial jobs also works against them, even if it could be true for at least some. Thirty percent of Afghans questioned by the Austrian Employment Office in a recent informal survey of 898 refugees granted asylum never attended school.

Near the other end of the scale, 68 percent of Syrians the largest group either held a university degree, a high-school diploma or a trade qualification, as did 90 percent of Iranians.

Complicating matters, many arrivals not only lack passports but also paperwork reflecting their education. Johannes Kopf, who heads the Austrian employment office, sees "optimistic results" for job seekers from Iran, Syria and Iraq and "depressing results" for Afghans.

In most cases, only migrants who have been granted asylum can work legally, but that process can take up to two years. Then comes the ability to speak German crucial for employment.

Yet the challenge of learning the language is made even more daunting by a shortage of courses. Even as refugee numbers continued to climb last year, the national employment office announced that it had cut its classes to 15,000 from 23,000 in 2014.

As opportunities tighten, some may decide it's all not worth it. As of November, the status of all of those who qualified for asylum since then is subject to review in three years to see whether it is safe for them to return to their home countries. That is bound to crimp the motivation to assimilate.

Hajar Al Jashame doesn't fall into that category. But as the 20-year-old Iraqi opens up about her job search in halting but serviceable German, it quickly becomes evident that even those who are here to stay don't have it easy.

Four years after arrival she has managed to complete grade 9 in an Austrian school. Not enough, she says.

"They all want a woman with at least grade 10," she says of responses to her job applications as a dental assistant. And when she asked her own dentist, she was told he wants "a girl without a headscarf."

"I asked, 'how come?' I was told 'that's how it is,'" she says. Austrian social workers relate similar cases of supermarket cashiers told to take off their headscarves while working.

Her one Austrian girlfriend is no help. Al Jashame says she turned to her once for motivation, only to be told "you foreigners are taking our jobs."

Bahram Zai Mohammad Shafak also remains unemployed but it's not for lack of trying.

Social workers say the 22-year old from Afghanistan finished high school at home but had no diploma to prove it when he arrived. Three years later, he too has an Austrian grade 9 education and has sent out more than 50 applications since April for an apprenticeship as a plumber or mechanic.

He says he got five replies and one interview that turned into an offer to work as an apprentice plumber. Shafak agonized and turned it down. It was clashing with his German course.

"It was even more important for me to improve my German," he said. "I need to be in a situation where I can write my own job application. I won't have volunteers to help me do that forever."

Both he and Al Jashame say they will go back to school if needed to land a job, while acknowledging that not all young refugees are similarly motivated. Shafak speaks of acquaintances happy to do nothing but collect generous Austrian financial support of about 600 euros (nearly $700) a month substantially more than twice the average salary back home.

Both say that's not an option for them.

"I want to do something with my life," says Shafak. Al Jashame nods.

It is unlikely to be easy, though.

Piani, the janitor, whistles cheerily as he changes a light bulb, then moves on to the next hotel room to do some minor plumbing. He has a job at Magdas, a hotel set up specifically to employ refugees past and present.

Across town from the NGO-run center where the two young people have just told their stories, Piani reflects on the more than a decade of odd jobs, punctuated by months of subsistence on social handouts that ended only when he landed his job two years ago.

Those jobless periods, he says, were the worst of his life in Austria.

"Being able to work is part of life," says Piani. "Sitting around, doing nothing that's bad for the body, for the soul, for society."

Asked what he would advise Shafak and Al Jashame, Piani smiles.

He also has a message for Austrians,

"We're also human beings with strengths and weaknesses," says Piani. "Have patience with us.