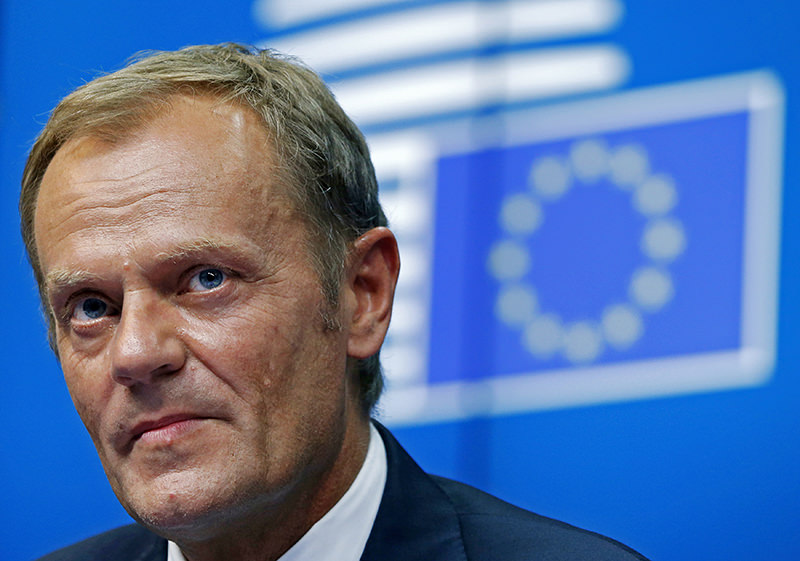 European Council President Donald Tusk attends a news conference during an EU summit in Brussels in this August 30, 2014 file photo. (REUTERS Photo)
by Daily Sabah with Wires Feb 15, 2016 12:00 am

Top EU official Donald Tusk calls for European unity as the gap widens within the bloc due to the migration crisis, even while Britain seeks controversial reforms ahead of a referendum on membership

European Council President Donald Tusk has warned just days before an European Union (EU) summit that the 28-nation bloc could break up under the strain from both mass migration and a deal to keep Britain in the union.

Speaking in Bucharest, Tusk warned on Monday, "This is a critical moment. It is high time that we started listening to each other's arguments more than to our own." Tusk said it was "natural that positions harden closer to crunch time," three days before the EU summit, which will have "the two biggest challenges to the future of the European Union on the agenda, Britain's membership of the EU and migration crisis."

"The risk of break up is real," Tusk said. "This process is indeed very fragile. Handle with care! What is broken cannot be mended."

Tusk also said that the wave of migrants which have arrived in the past year "is stretching our union to its limits. It is most important is to stem the flow of migrants... we must increase humanitarian aid to migrants" in countries neighboring Syria.

The former Polish prime minister, who has been on a lightening tour to dissuade Britain from leaving the EU ahead of a referendum expected this year, warned that the 28-member bloc was at a "critical moment." Hours later, after last-minute talks between French President Francois Hollande and British Prime Minister David Cameron held in Paris, a Downing Street spokesman indicated a deal is expected during a crunch summit on Thursday and Friday.

The two leaders "agreed that we are making good progress on the UK renegotiation and that the draft text from the European Council provides a firm basis to reach agreement at this week's summit," the spokesman said.

The upbeat assessment came after a French official earlier warned that while there was "political willingness" to clinch an agreement, "more work is needed, particularly on economic governance." Britain does not use the euro, wants to renegotiate the terms of its EU membership to curb migration and protect it from ever having to pay into a fund to protect the Eurozone, following years of debt crisis. London also wants any issues that affect the entire EU to be discussed by all 28 member states, and not just the 19 nations that use the single currency.

A eurosceptic rally is due to be held in London on Friday evening. Cameron also spoke on Monday to Tusk, who said he hopes a deal could be pushed through this week. But whatever deal he strikes is unlikely to satisfy some factions in Britain, including some within his own Conservative Party. The anti-EU UK Independence Party accused Cameron of being a "chicken" after he pulled out of a meeting that would have included its leader Nigel Farage.

Cameron had been expected to attend a gathering of presidents from each of the European Parliament's groups during a visit to Brussels on Tuesday. Instead, he will only hold bilateral meetings, including with European Parliament president Martin Schulz and the three MEPs involved in the negotiations.

Even if the bloc's leaders agree on changes in areas including child benefit payments for EU migrants in Britain, as Cameron wants, the European Parliament must still approve the changes.

The EU is already facing questions about its future as it struggles with the biggest migration crisis in 70 years, and there are fresh fears about the health of the Eurozone economy. British Foreign Secretary Philip Hammond warned Sunday the EU will "lurch very much in the wrong direction" if Britain leaves, predicting negotiations at this week's summit "would go to the wire."

EU officials have long been warning that the EU and open-border Schengen system may face harsher obstacles if EU countries do not find a collaborative solution to the recent migrant crisis. The majority of migrants come from the Middle East and Africa. The turmoil in the Middle East and the five-year war in Syria have led many people to flee the conflict seeking security and shelter in more prosperous and peaceful countries, such as those in Europe.
Last Update: Feb 16, 2016 3:50 pm
RELATED TOPICS