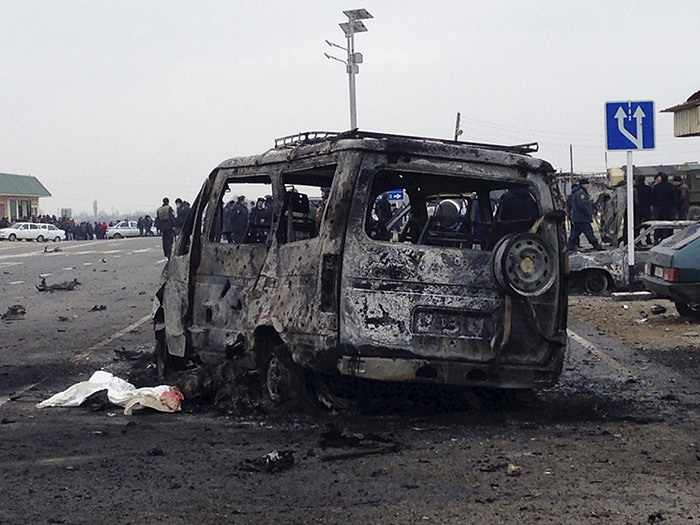 A burnt vehicle near a damaged traffic checkpoint near the town of Derbent in Dagestan's southeast, Russia, February 15, 2016 (Reuters Photo)
by Associated Press Feb 15, 2016 12:00 am
A powerful car bomb exploded Monday at a police checkpoint in Russia's Dagestan republic, killing two officers and the car's driver and wounding 19 others, in what appears to have been a suicide attack, investigators said.

The attack was organized by terrorists who have sworn allegiance to the Daesh group, said Rasul Temirbekov, spokesman for the Dagestani branch of the federal Investigative Committee.

The explosion, which was set off by two 122 mm shells, destroyed the Russian-made Lada Priori and four other vehicles parked at the police post near Derbent, he said. All that remained of the driver of the Lada were fragments of his head, hands and feet, the spokesman said.

In recent years, many of the militants have proclaimed allegiance to Daesh while at the same time the republic has grown markedly less violent as hundreds of them have left to join Daesh in Syria. Some, however, are now coming back home with battlefield experience. While the returning fighters usually land in jail or are kept under close police surveillance, there have been concerns that the presence of radicals trained in Daesh warfare could lead to greater instability and violence.