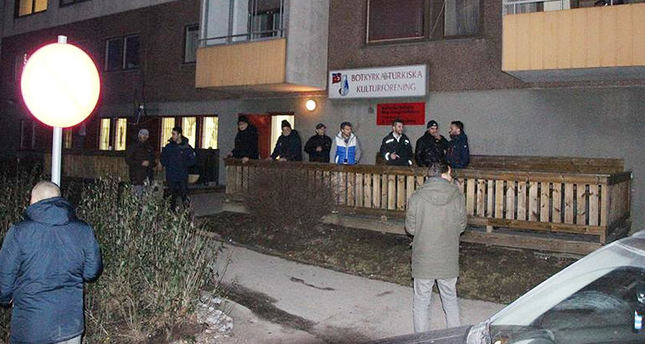 by Compiled from Wire Services Feb 18, 2016 12:00 am
An explosion late Wednesday at the Botkyrka Turkish Culture Association in the Swedish capital of Stockholm drew suspicion to supporters of the PKK terrorist organization and its Syrian Kurdish affiliate, the Democratic Union Party (PYD).

An explosive device detonated at the association, located next to a mosque, smashed the windows of the building and caused major damage. No casualties were reported in the incident, as the building was empty at the time of the attack.

The blast came about one week after a group of PKK-PYD sympathizers hurled rocks at the building and assaulted a member of the association.

Quoting police spokesman Lars Bystrom, an Associated Press (AP) report said no arrests have been made and police are not certain whether the bombing was linked to a car bombing in the Turkish capital of Ankara that occurred on the same night. A total of 28 people were killed and 61 others were wounded in an attack targeting Turkish military personnel in Ankara, and the attack was blamed on the YPG.

The PKK has waged a violent campaign in southeastern Turkey since last summer, and killed more than 200 Turkish security personnel and civilians in separate attacks since then. The militant group is linked to the PYD, which controls swathes of northern Syria, and the People's Protection Units (YPG), which is viewed as its armed wing.

The association is located in the Stockholm neighborhood of Fittja, in Botkyrka municipality, which hosts a large immigrant population including Turkish citizens.

Police sealed off the site and an investigation to find the perpetrators was still underway as the news went to print. Security measures were tightened in the area after the attack.

Swedish media reports based on eyewitnesses' account said a person was seen throwing an object at the building at the time of the attack. İsmail Zengin, head of the association, told Turkish media outlets that the attack took place a few hours after they closed the office. He did not point to any group that might be behind the attack, but stressed that Turks and Kurds have always been on friendly terms and peacefully coexisted in Fittja.

Zengin added that "there might be some people seeking to harm this friendship," Anadolu Agency (AA) reported. He called for "common sense to prevail" in the aftermath of the attack.

Last week, a group of PKK-PYD supporters hurled rocks at the building and tore down the association's sign. Some 200 rioters also confronted Sabri Sönmez, a member of the association trying to stop them, and assaulted him. Zengin told AA that Swedish police were late to intervene in the attack at the time. Also on Saturday, a man carrying PKK banners was shot by an unknown suspect in Fittja.

Sweden hosts a community of Turks numbered at around 100,000, mostly migrant workers who arrived from central Turkey in the 1960s and 1970s and their descendants, along with a Turkish Kurdish population hailing from southeastern Turkey. The PKK claims to fight for Kurdish self-rule in southeastern Turkey. The group's supporters in Sweden engaged in violent clashes with Turkish demonstrators opposing their rally in Stockholm in September 2015.