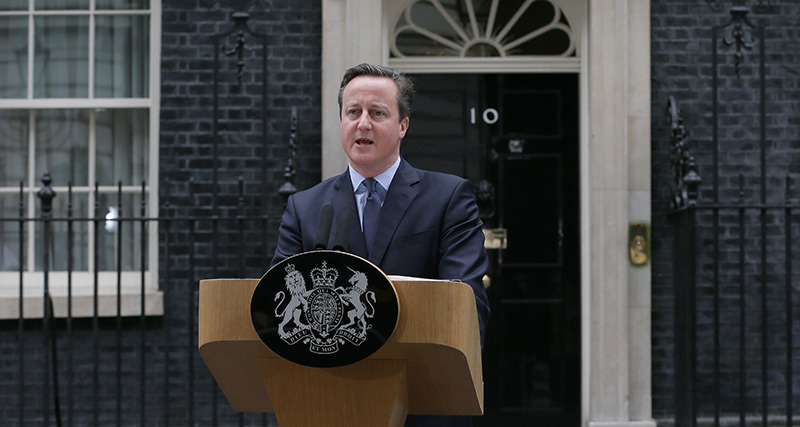 by Feb 20, 2016 12:00 am
Britain will vote on the future of its membership in the European Union on June 23, Prime Minister David Cameron said Saturday, as he began the daunting challenge of persuading the country to stay in the bloc

He announced the date for the referendum after a two-hour cabinet meeting where he briefed ministers on the deal he struck in Brussels on Friday, which he said will give Britain "special status" in the EU. "We are approaching one of the biggest decisions this country will face in our lifetimes," Cameron said, addressing the nation outside his 10 Downing Street residence. "The choice goes to the kind of country we want to be," he said, warning that proponents of leaving were offering "a risk at a time of uncertainty, a leap in the dark."

Britain would be "safer, stronger and better off" in the 28-member bloc, he said, calling the concessions negotiated with other EU leaders "the best of both worlds."

The referendum campaign will be bitterly contested in a country with a long tradition of Euroscepticism and a hostile right-wing press, with most opinion polls showing Britons are almost evenly divided. "[June] 23rd is our golden opportunity, let battle be joined," said the leader of the anti-EU United Kingdom Independence Party (UKIP), Nigel Farage, branding the deal "pathetic."

Cameron's Conservative Party is particularly split, and no sooner had Saturday's cabinet meeting ended than six of its 22 ministers announced they would be campaigning to leave. Among them is Justice Minister Michael Gove who said, "This chance may never come again in our lifetimes."

The Mail yesterday carried good news for Cameron with a Survation telephone poll showing the "in" campaign with a 15 percent lead, a huge swing from level previous surveys.

Cameron announced his intention to hold a referendum three years ago, under pressure from Conservative Eurosceptics and the rise of the UKIP. He said he would only campaign to stay in if he could secure reforms to address key concerns about EU migration, loss of sovereignty, economic competitiveness and the protection of non-eurozone Britain's financial sector.

Cameron said he would campaign "with all my heart and soul" to stay, a position supported by the opposition Labour Party, whose leader Jeremy Corbyn criticized the deal but said being in Europe had brought Britain investment and jobs. "Despite the fanfare, the deal that Cameron has made in Brussels on Britain's relationship with the EU is a sideshow. His priorities in these negotiations have been to appease his opponents in the Conservative Party," Corbyn said.

But critics in Britain say the deal, which contained restrictions on welfare payments for EU migrants and an opt-out for Britain from the EU's goal toward an ever-closer union, fell short. "Call that a Deal, Dave?" headlined the Daily Mail, while The Daily Telegraph said Cameron had made "puny gains" and The Times called it "thin gruel."

Analysts say the nitty gritty of the EU deal will likely be only a small part of the referendum campaign, which is already focused on immigration, security, prosperity and Britain's place in the world. "Voters are not going to decide by this deal," said John Springford, senior research fellow at the Centre for European Reform think tank.

Anand Menon, professor of European politics at King's College London, said he expected both sides to emphasize the risks of either leaving or sticking with the status quo. "This is going to be a depressingly negative campaign," he told Agence France-Presse (AFP).

The date for the referendum, which clashes with the Glastonbury music festival, an EU summit in Brussels and comes in the middle of the Euro 2016 football tournament, has to be approved by parliament. The question on June 23 will be: "Should the United Kingdom remain a member of the European Union or leave the European Union?"