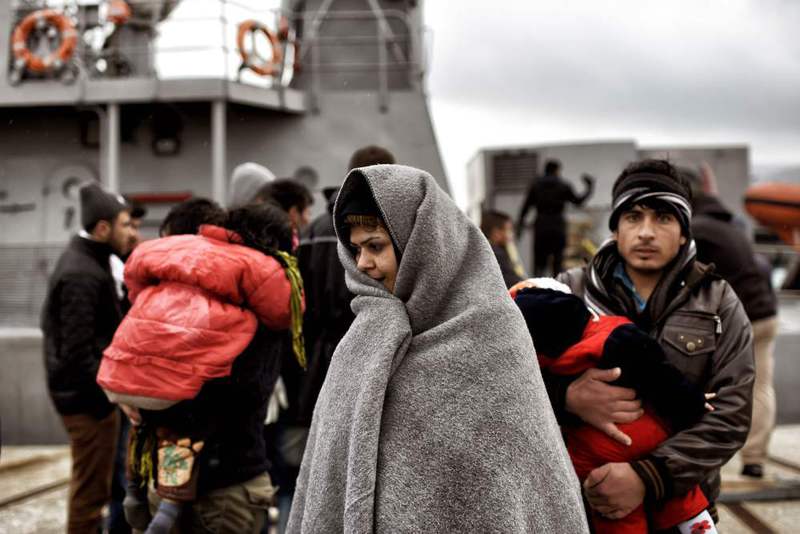 Migrants rescued by the Greek coast guard disembark from a ship upon their arrival to Mytilene on the northern island of Lesbos after crossing the Aegean Sea on Feb. 19. (AFP Photo)
by Daily Sabah with Wires Feb 20, 2016 12:00 am

While Europe is discussing migrants at a two-day EU summit in Brussels, the UNHCR said the EU has failed to deliver a collaborative response to the crisis. Meanwhile, the latest U.N. figures show two migrant children die every day on average trying to cross the Mediterranean Sea

Europe has "completely failed" in its response to the migrant crisis, United Nations High Commissioner for Refugees Filippo Grandi said in a German newspaper interview.

"Regarding registration and sharing [of refugees], European cooperation and solidarity have completely failed," he told the Frankfurter Allgemeine Zeitung (FAZ), cited in German in the paper's Friday print edition. The Italian, who took up the U.N. job on Jan. 1, also warned against European countries closing their borders, which would block many refugees, already in distress, in Greece. "Our fear is that the closure of national borders in Europe could lead to hundreds of thousands of refugees staying in Greece," he said, in extracts of an interview published Thursday evening. "Our message aimed at Europe is: 'Pull yourself together and deal with [the situation] yourselves.' But if our help is needed, we will be there."

Grandi notably pointed the finger at a European Union deal struck last summer on the sharing some 160,000 refugees, and which has gone nowhere ever since. Only 583 "relocations" have actually gone ahead due to foot-dragging by certain countries, notably in the continent's east. "Yes, it is important that the system [of sharing] be applied, but it will be difficult," Grandi said. "At the moment, I don't see a lot of momentum in that direction."

According to UNHCR figures, more than 1 million migrants arrived in Europe by sea last year. Nongovernmental organizations (NGOs) have repeatedly condemned what they see as indifference by EU member states toward the fate of those fleeing war and misery.

While most of her EU colleagues have turned their backs on them, German Chancellor Angela Merkel has proved "courageous," Grandi said. Germany opened its doors to over a million asylum seekers in 2015. Despite criticism from part of her governing coalition and growing unpopularity among ordinary Germans, she has refused to set a ceiling on numbers for this year.

Amid deep divisions between EU states, Austria's new daily cap on asylum seekers entered into force yesterday, in a move that the European Commission (EC) has described as "plainly incompatible" with European Union law. Beginning from yesterday, a maximum of 80 migrants per day are being allowed to claim asylum in the country, police said. In addition, Vienna is limiting the daily number of people transiting Austria to seek asylum in a neighboring country to 3,200. Once the quotas have been reached, "the borders will be closed," police spokesman Fritz Grundnig told Agence France-Presse (AFP). He added that due to bad weather, no migrant had arrived at the Austrian-Slovenian frontier since Thursday afternoon.

Vienna's measures – announced earlier this week along with tougher controls at 12 checkpoints along its southern borders – drew an angry reaction from the EU on Thursday. "Such a policy would be plainly incompatible with Austria's obligations under European and international law," European migration commissioner Dimitris Avramopoulos complained in a letter to Austrian Interior Minister Johanna Mikl-Leitner.

EC President Jean-Claude Juncker also criticized the proposal. But Austrian Chancellor Werner Faymann said there "will be no lifting of the decision," speaking at a two-day EU summit. In response, Slovenia, Croatia and Serbia have also tightened their borders.

In 2015, more than 1 million people reached Europe's shores – nearly half of them Syrians fleeing a civil war that has claimed thousands of lives. The vast majority enters the EU through Italy and Greece, where they should register, but poor controls mean most are able to continue their journeys to northern Europe.

The majority of migrants come from the Middle East and Africa. The turmoil in the Middle East and the five-year-long war in Syria have led many people to flee the conflict in an attempt to seek security and shelter in a more prosperous and peaceful country, such as one in Europe. However, Europe has been slammed for lacking a collaborative response to the crisis.
RELATED TOPICS