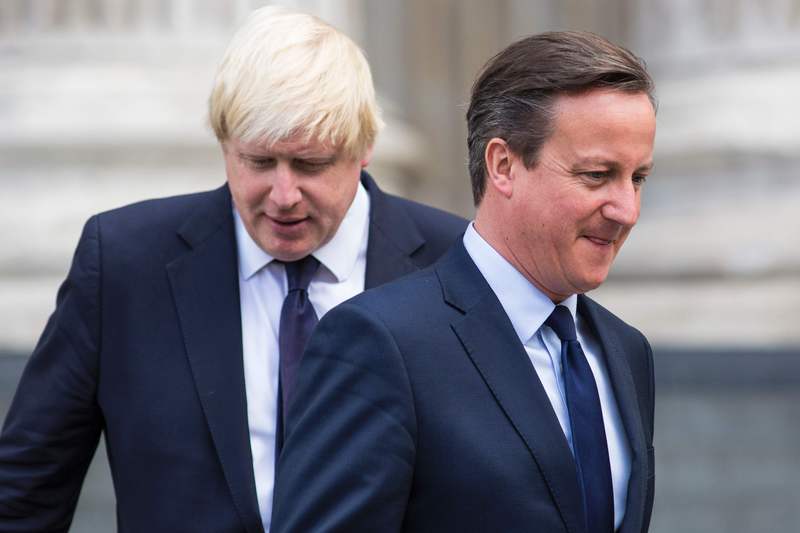 by Feb 21, 2016 12:00 am
London Mayor Boris Johnson on Sunday threw his weight behind the campaign to leave the European Union, dealing a blow to David Cameron by increasing the chance British voters will ditch membership in a June referendum.

In a move that electrified the referendum campaign by pitting one of Britain's most charismatic politicians against the prime minister, Johnson said Cameron had failed to deliver fundamental reform with an EU deal struck on Friday.

Johnson, a political showman whose buffoonish and eccentric style is thought to mask a fierce ambition to succeed Cameron, said the European project was in danger of getting out of democratic control.

"The last thing I wanted was to go against David Cameron or the government, but after a great deal of heartache I don't think there's anything else I can do. I will be advocating Vote Leave," Johnson told reporters outside his north London home 20 minutes after texting the prime minister his decision.

"I want a better deal for the people of this country to save them money and to take back control," said Johnson, mayor since 2008 and a member of parliament for Cameron's Conservative Party.

Johnson, 51, said he would not take part in debates against members of his own party. But his decision gives the "out" campaign a de facto leader who is one of Britain's most high-profile politicians.

Betting odds of a British exit rose to a 33 percent chance from around 29 percent, according to bookmakers.

Johnson dismissed questions from reporters about whether joining the campaign to leave the EU was the first step towards a bid to succeed Cameron. On the contrary, he said with a smile, Cameron should stay no matter who won the June 23 referendum.

By challenging Cameron less than 48 hours after the prime minister hailed a deal struck with other EU leaders as giving Britain a special status, Johnson deepened a divide in the ruling Conservative Party, split over Europe for three decades.

A British exit from the EU would rock the Union - already shaken by differences over migration and the future of the euro zone - by ripping away its second-largest economy, one of its top two military powers and by far its richest financial centre.

Pro-Europeans, including former prime ministers Tony Blair and John Major, have warned that an exit could also trigger the break-up of the United Kingdom by prompting another Scottish independence vote.

A poll published before Johnson's move showed the "in" campaign with a lead of 15 percentage points. Polls suggest about a fifth of voters are undecided.

Johnson, instantly recognisable by his thatch of platinum-blond hair, had repeatedly avoided staking out a clear position on Britain's EU membership.

But on Sunday he said the EU was "in real danger of getting out of proper democratic control" and national sovereignty had been eroded.

Cameron's backing for EU membership has the support of the City of London, major companies, much of the Labour Party, major trade unions, international allies and Scottish nationalists. Opposed are several bickering "out" campaign groups.

"The big battalions of the argument are unquestionably ranged against people like me: we are portrayed as crazy cranks and all the rest of it. I don't mind, I happen to think that I'm right," Johnson said.

"Boris Johnson's decision to campaign for 'out' is a huge boost for the Leave campaign," said Hugo Dixon, a Reuters columnist and the author of "The In/Out Question", a book in support of Britain's membership.

"He is a popular figure who crosses traditional political lines. The chance of Brexit has risen," said Dixon, who is also editor of the pro-EU InFacts group.

One in three voters said Johnson would be important in helping them decide which way to vote, an Ipsos MORI poll showed.

Cameron has said he will step down as prime minister before 2020. If Britain remains in the EU, Johnson's chances of getting the top job could be tarnished by having openly opposed him.