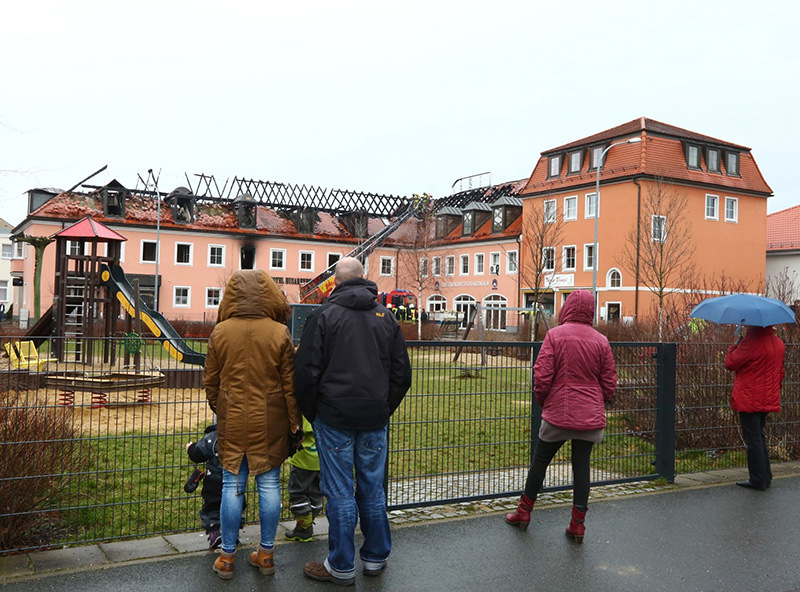 People look at burnt-out roof truss of a former hotel that was under reconstruction to become home for asylum seekers on Feb 21, 2016 in Bautzen, eastern Germany (AFP)
by Daily Sabah with Wires Feb 22, 2016 12:00 am

Shocked German officials on Sunday condemned two "disgusting" incidents involving anti-migrant mobs in the ex-communist east of the country, including a crowd cheering a blaze at a planned refugee shelter.

A group of 20-30 apparently drunken onlookers celebrated the as the suspected arson fire damaged a former hotel being converted into a refugee home in eastern Germany, police said Sunday, raising new concerns about violence toward migrants in a nation that registered more than a million asylum seekers last year. Police suspected arson and traces of fire accelerant were found. Some members of the group also tried to impede the work of firefighters dispatched to the scene, police said. A police spokesman added that the group showed "unabashed delight" at the blaze and made "disparaging comments" about the efforts to contain it.

While most Germans have been welcoming toward refugees, a vocal group has staged protests in front of refugee homes, especially in the east. Germany last year saw a surge in violence against such lodgings. The events came two nights after 100 people in the Saxony town of Clausnitz tried to block the arrival of a bus carrying about 20 asylum seekers to a new shelter.

The scenes, captured on video, show the mob angrily shouting, "We are the people," borrowing the pro-democracy slogan from the peaceful revolution that led to the fall of the Berlin Wall in 1989. The images, which have gone viral on social media, show police officers dragging terrified refugees out of the coach, including a teenage boy reportedly from Lebanon.

Police chief Uwe Reissmann sparked further outrage when he gave the migrants themselves partial blame for the fraught scene, noting that some had filmed the mob with their cellphones and made obscene gestures at them. He said he had not ruled out criminal charges against the protesters or the migrants.

Members of Chancellor Angela Merkel's left-right "grand coalition" government, which has come under increasing pressure over its liberal stance on asylum seekers, expressed outrage at the incidents. "Racists are pathetic lawbreakers, a disgrace for our country. Shame on you!" Germany's Deputy Foreign Minister Michael Roth wrote on Twitter. "Those who shamelessly applaud when houses burn and scare refugees to death are displaying disgusting and revolting behavior," Justice Minister Heiko Maas tweeted.

Maas told media group RedaktionsNetzwerk Deutschland he was stunned by the growing brazenness of far-right groups, which he said crossed the line of free expression to become a threat to public safety. "Verbal radicalism is a prelude to physical violence," he said, noting there were more than 1,000 criminal acts against refugee shelters were recorded in Germany last year, when the country let in nearly 1.1 million asylum seekers. Saxony registered the highest number of attacks.

Interior Minister Thomas de Maiziere said it was "totally unacceptable that people who are seeking protection from oppression are met with hatred and incitement." "There is a basic level of decency and respect for the law that may not be violated, and in these incidents in Saxony, that level was clearly violated," he said, according to Deutsche Presse-Agentur (DPA) news agency.

Aydan Ozoguz, who handles integration issues for the government, condemned the actions of the police in Clausnitz, calling it "deeply shocking" that the authorities were "not protecting the refugees." She also blasted the "deplorable" scenes in Bautzen. "I am horrified that you again [witness] scenes in Germany in which a mob applauds because a refugee shelter is burning," she said.