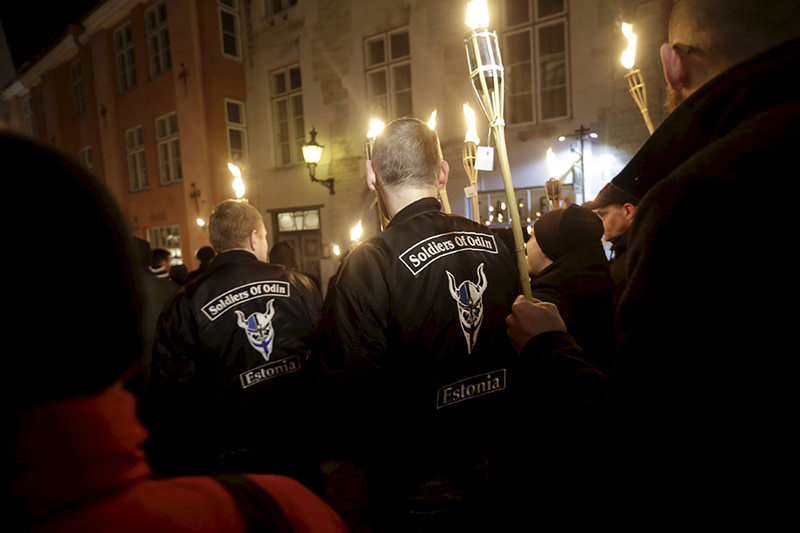 Members of Soldiers of Odin Estonia attend torch-lit procession during Independence Day celebrations in Tallinn, Estonia, in this Feb 24, 2016 photo (Reuters)
by Mar 02, 2016 12:00 am

The Soldiers of Odin, self-proclaimed patriots who have patrolled the streets of some cities in Finland saying they wants to protect locals from immigrants, have begin appearing in other Nordic and Baltic countries

Named after the king of the gods in Norse mythology, "The Soldiers of Odin" members say they want to be the eyes and ears for the police who they say are struggling to fulfil their duties.

With some 250,000 asylum seekers moving into the region as a whole over the last year, the group has triggered fears of a rise in vigilantism.

The Soldiers are now expanding outside Finland, wearing similar black jackets adorned on the back with a Viking, his mouth covered with the relevant country's national flag, and the name of the group written in English.

In Estonia, the group held their first meeting in mid-February, with local media reporting that 60 people attended.

"We don't want refugees to come here," Indrek Olm, who said he was one of the leaders of the group in Estonia, told Reuters later in the month.

"We will start going on patrol to make sure they don't do something illegal."

The Baltic country of 1.3 million has almost no asylum seekers or refugees. But the authorities nonetheless do not like the Soldiers of Odin.

"Self-proclaimed patrol gangs do not increase the Estonian people's sense of security in any way, rather the opposite," Prime Minister Taavi Roivas said on Twitter.

In Norway, police have expressed concern about how the arrival of some 31,000 asylum seekers in the country of 5.2 million last year will affect far-right groups.

"We consider the threat from right-wing milieus to be increasing. The asylum issue is fuelling right-wing activity, radicalisation and recruitment," said the Police Security Service in its latest threat assessment last month.

"Our main goal is to prevent violence, the sale of drugs and not least sexual assaults," Ronny Alte, then spokesman for the Soldiers of Odin in Norway, told Reuters. Alte has since quit the group over differences about the organisation's stance.

"And if you look at these problems ... it is unfortunately the case that immigrants, and not least illegal immigrants, are over-represented in these cases," he said.

Other patrols have taken took place in several cities, while others were stopped by police. In the city of Kristiansand in the south, the Soldiers of Odin were told by police they could only distribute free buns and coffee.

The Soldiers of Odin do attract support in some quarters.

"Every citizen who wants to contribute towards reducing criminality and insecurity should be applauded," Jan Arild Ellingsen, a lawmaker from the populist Progress Party, a member of Norway's ruling coalition, told broadcaster NRK.

But his statement was condemned by Norway's prime minister. "The Soldiers of Odin have no place in the work to keep our streets safe. Dangerous values," Erna Solberg said on Twitter.