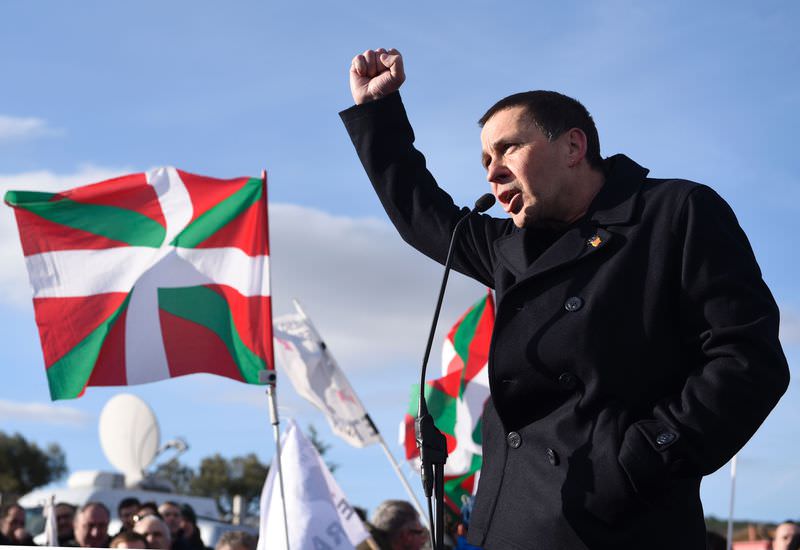 A veteran Basque leader and former member of the armed separatist group ETA credited with helping end violence in the northern Spanish region vowed Tuesday to keep pushing for peace after he was released from jail.

Arnaldo Otegi, 57, was met by about 200 supporters -- many waving red, white and green Basque flags -- as he left the prison in the northern city of Logrono.

He was freed after serving six and a half years for trying to resurrect the outlawed separatist party Batasuna.

"Peace is the path to follow and it is what I propose to do with you," he added as his supporters chanted "Independence!"

Batasuna was banned in 2003 for being the "political wing" of ETA, which is blamed for over 820 killings in its campaign of bombings and shootings to create an independent Basque homeland in northern Spain and southwestern France.

It re-emerged as a legal pro-independence party, Sortu, which campaigns for independence through democratic means.

Otegi was elected Sortu's secretary general while behind bars in 2013. As a convict, he will not be eligible to run for office until 2022, although he may challenge this in court.

Otegi told the New York Times in a written statement from prison that he aims to become the next leader of Spain's Basque Country, which will hold regional elections at the end of the year.

He added he will run in March for internal elections to choose candidates for EH Bildu, a pro-independence coalition party.

Hundreds of people gathered in a square in Otegi's hometown Elgoibar to welcome him home with song and dance hours after his release from jail.

Otegi urged his supporters to follow the example of the northeastern region of Catalonia, where a coalition of separatist parties won a regional election in September.

The Catalans "are giving us a real lesson on what must be done and I thank them," he said as he stood surrounded by his wife, children and parents.

"There is still a long way to go and it is not going to be easy. Now it is time to win and create the conditions that make co-existence, peace, but also freedom and equality, possible."

Irati Gurrutchaga, 18, said she was "certain" Otegi would give the Basque separatist movement a boost.

"We know all that he did for peace before being jailed and we are persuaded that his way of speaking will help things evolve here," she told AFP.

While some hail Otegi as a hero, for others -- especially relatives of ETA victims -- he remains a hate figure.

The Association of Victims of Terrorism, formed mainly of ETA victims, said on Twitter that it felt "indignation" at the sight of "an ETA terrorist being given a hero's welcome".

An active ETA member since the age of 19, Otegi has spent 15 year behind bars -- including for the 1979 kidnapping of a factory director in Vitoria, northern Spain.

But in the 1990s he also became one of the first ETA members to call for disarmament, earning him comparisons to Gerry Adams, whose Sinn Fein party was once seen as the political voice of the Irish Republican Army (IRA).

In 2006-2007, Otegi was one of the main architects of peace negotiations between ETA and the Spanish government.

The talks broke down after a bombing at Madrid airport in December 2006 that left two dead, an attack carried out by ETA militants opposed to disarmament.

The government then adopted a hard line against ETA, arresting dozens of people with links to the outfit, including Otegi.

In September 2011 he was sentenced to ten years in jail for trying to revive Batasuna.

The following month a weakened ETA declared a "definitive end to armed activity".

ETA has yet to formally disband or disarm although its last deadly attack on Spanish territory was in August 2009.