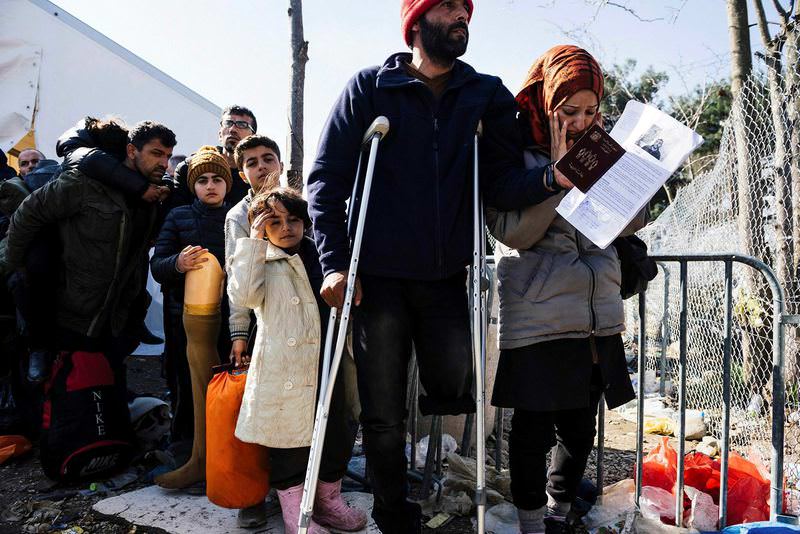 Refugees including a disabled man, have been waiting for days to cross the Macedonian border.
by Daily Sabah with Wires Mar 03, 2016 12:00 am

After clashes have increased between police and refugees, trapped between Macedonian-Greek border, Macedonia agreed to sporadically open its borders with Greece for Iraqi and Syrian refugees

Macedonia intermittently opened its border with Greece to a tiny trickle of Syrian and Iraqi refugees Wednesday, leaving about 10,000 more people camped on the Greek side, with more arriving daily. The border bottleneck has left at least 25,000 people stranded in Greece, the first European country that migrants reach in smuggling boats from Turkey. As the prosperous but divided continent flails in search of a workable solution, individual countries led by Austria have imposed immigration caps that have caused a domino effect down the Balkan immigration corridor, which has been traversed by a million people over the past year. Greek police say Macedonian police opened the Idomeni crossing at midnight Tuesday and 7 a.m. Wednesday, each time for two hours. They admitted a total of 170 people from Syria and Iraq the only nationalities allowed to continue north. Hundreds, including many families with small children, arrive daily at Idomeni in northern Greece, where two official camps are so full that thousands have set up tents in fields all around. Macedonia says it will only allow in as many refugees as Serbia, its northern neighbor, accepts each day.

A field official with the United Nations refugee agency on the Macedonian side of the crossing said authorities will soon send a train with about 500 people from the nearby town of Gevgelija to the Serbian border. He spoke on condition of anonymity because he was not authorized to brief the media. Jasmin Rexhepi, head of the aid group Legis, told The Associated Press that a group of about 50 Pakistanis remain trapped for a fourth day on the Macedonian side of the border between two razor-wire fences. He said Macedonian authorities are trying to send them back to Greece because the group crossed the border illegally. Rexhepi also said that about 1,000 refugees 750 Afghans and 250 Iraqis are stuck at Macedonia's border with Serbia, which has refused them entry.

In Greece, arrivals by smuggling boats from Turkey on the eastern Aegean Sea islands continue at a rate of nearly 2,000 a day. More than 120,000 have landed so far this year, on top of 850,000 in 2015. A string of hastily thrown-up transit camps on the mainland has rapidly filled up, and hundreds are sleeping rough in a central Athens square. Authorities have restricted the flow of migrants from the islands to Athens' port of Piraeus, where about 1,000 people still arrived by ferry by midday Wednesday.

A spokesman for German Chancellor Angela Merkel said on Wednesday that EU states should not leave Greece alone to deal with an influx of migrants and refugees, but also urged Athens to do its part by protecting its border effectively. "Greece should not be left alone in the situation in which it finds itself," Steffen Seibert told a regular government news conference. "At the same time, Greece must ... protect its borders effectively and also push ahead with the construction of functioning hotspots and sufficient accommodation capacities," he added. There were an estimated 22,000 migrants and refugees trapped in Greece on Monday, some sleeping rough in central Athens, some in an abandoned airport and at the 2004 Olympic Games venues. "Very many people were forced to sleep in the open, without tents, wrapped in blankets," said 45-year-old Syrian refugee Nidal Jojack, who has been camped out with her family at Idomeni for three days. "It was very cold. The borders are effectively closed, it's a huge problem. To get food, we have to wait in very long queues." Jojack said she hopes to reach Germany where her 18-year-old son has already arrived. Nearly 100 foreign police officers from countries including Serbia, Croatia, Slovenia and Austria were deployed in Macedonia, he said, adding the figure could go up to 350. In a speech to the U.N. Human Rights Council in Geneva, he said that "encouraging" cooperation had been established with Greece on the issue but that it may not be enough. The majority of migrants come from the Middle East and Africa. The turmoil in the Middle East and the five-year war in Syria have led many people to flee the conflict in an attempt to seek security and shelter in a more prosperous and peaceful country, such as one in Europe. However, Europe has been slammed for lacking a collaborative response to the crisis.

The influx of refugees has led to controversies over whether Schengen visa system will be abolished. A collapse of Europe's 26-nation Schengen zone of passport-free travel would create major congestion and cost larger airports hundreds of millions of euros to redesign terminals, airports association ACI Europe said on Wednesday. The Schengen zone, which also now counts four non-European Union countries as members, was created more than 30 years ago and airports have as a result designed terminals to have separate Schengen and non-Schengen zones. The free-travel agreement has come under increasing strain due to the refugee crisis, with several countries imposing temporary border checks in order to stem the flow of people from countries such as Syria.

Olivier Jankovec, director general of ACI Europe, said while it was not on the cards, any moves to reinstate air border controls between Schengen states would have a drastic impact and that restructuring airport facilities could easily cost hundreds of millions of euros for the largest airports. There are around 443 airports located within the Schengen zone, used by around 1.2 billion people in 2015, said ACI Europe, whose members include Aena, Aeroports de Paris and Fraport. "The immediate impact would be unprecedented levels of congestion and flight disruptions, with potential spillover effects across the entire European airport network," Jankovec said in a statement. It would also lead to longer travel times because airports would no longer be able to guarantee connection times between flights, he said. The shortest connections are about 45 minutes at present. While calling for Schengen to remain intact, ACI Europe also welcomed moves by the European Commission to try to strengthen Schengen's external borders, but said it would require governments to deploy extra police and border staff at airports.