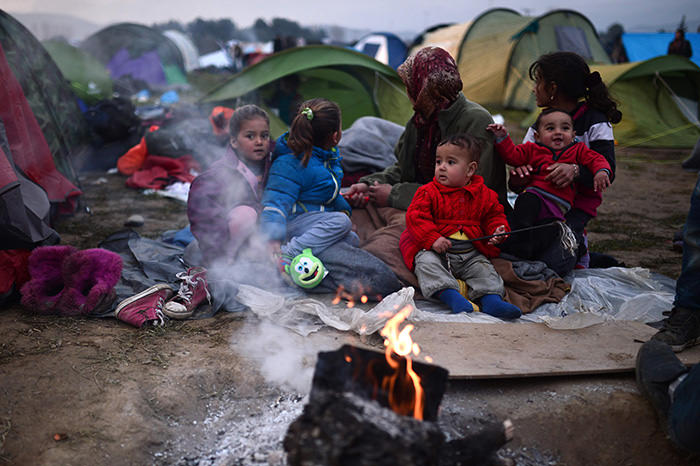 Refugees warm-up by a fire at a makeshift camp along the Greek-Macedonian border near the village of Idomeni on February 28, 2016. (AFP Photo)
by Daily Sabah with Wires Mar 03, 2016 12:00 am
Some 100 mostly Iraqis and Syrians, nearly half of them children, remain stranded on the Serbian side of the border with Croatia as the latter country refuses to take them in for various administrative reasons.

Mohammad al-Aziz said half of his 10-member family managed to cross into Croatia, but he and the rest of the family has been stuck in a refugee center on the Serbian side of the border for the past 12 days. He said he has made three attempts to cross into Croatia, but each time the Croats turned him back after seeing stamps in his Iraqi passports that show he spent three months in Turkey on his way to Europe.

"They are saying that I'm not directly fleeing from the war in my country and that I should get back to Turkey," Al-Azizi said. "Half of my family had the same stamps in their passports, but they let them in." Others at the center in Sid said that they were turned back from the Croatian border because some data in the refugees documents issued on the Macedonian border with Greece did not match the data in their passports, such as misspelled or incomplete names or wrong birth dates.

"They make our life miserable," said Mohammad Abdali from Raqa, Syria. "I'm not moving from here. If I survived DAESH, I'll survive this as well."

The European Union on Wednesday proposed 700 million euros in emergency aid for Greece and other states as it began to tackle the refugee crisis within its borders like humanitarian disasters in developing countries.

The United Nations has warned of a looming humanitarian crisis as thousands of people remained stuck in miserable winter conditions on the Greece-Macedonia border after Balkan states and Austria capped the number of refugee allowed to enter their respective countries.

Greece has been the main point of entry for the more than 1.13 million refugees who have arrived since the start of 2015 in the EU, which has been divided and weakened by its biggest migration crisis since World War II. "No time can be lost in deploying all means possible to prevent humanitarian suffering within our own borders," EU Humanitarian Aid Commissioner Christos Stylianides said, adding that much of the help would go to Greece.

The crisis is particularly acute at the Greek border crossing of Idomeni where more than 10,000 are stuck after Balkan states including neighboring Macedonia imposed tighter border controls.
Non-EU Macedonia on Wednesday allowed some 250 Syrian and Iraqi refugees to cross, the first group since dawn on Monday when the border was closed.

Bleak scenes played out Wednesday with refugees in mud-soaked fields fighting over food distributed from the back of a van, as aid agencies reported a lack of food and tents, and warned that the wintry weather was taking a toll on people's health. "We know [the border] is closed, but what will happen? There isn't any other way. We must go here and wait," said Mouiiaed Saker, a Syrian refugee.

A group of refugees at Greece's border with Macedonia blocked a rail line yesterday in protest of Macedonia's refusal to let them in to continue their route toward Western Europe. The group laid down on the Greek side of the train tracks, preventing a freight train that had just crossed from Macedonia from continuing its journey south.

In the French port of Calais, a group of Iranian refugess sewed their mouths shut in a disturbing protest at the ongoing demolition of the "Jungle" refugee camp. The camp is a magnet for people hoping to reach the United Kingdom and many have refused to leave, although there has been no repeat of the violent clashes that erupted on Monday.

So far, more than 131,000 refugees have crossed the Mediterranean Sea to reach Europe this year, U.N. figures show – more than the total number for the first five months of 2015. Last year, a million landed on Europe's shores.

The EU's plan for an internal aid mechanism marks a departure for the 28-nation bloc, which normally only gives aid to countries outside the EU, notably in the Middle East and Africa. The EU, which has an annual aid budget of 1.2 billion euros for external countries, would work directly with the U.N. and other aid agencies in Europe. But the apparent show of European solidarity masks growing criticism of countries that have capped the number of refugees they are willing to let in.

European leaders are divided ahead of two summits this month on the migration crisis, with German Chancellor Angela Merkel saying that debt-hit Greece must not be allowed to plunge into "chaos." The crisis has also raised fears for the EU's Schengen passport-free zone as more states bring back border controls.

The majority of refugees hail from the Middle East and Africa. The turmoil in the Middle East and the five-year civil war in Syria have led many people to flee the conflict in an attempt to seek security and shelter in a more prosperous and peaceful country, such as one in Europe. However, Europe has been slammed for lacking a collaborative response to the crisis.
Last Update: Mar 03, 2016 5:20 pm
RELATED TOPICS