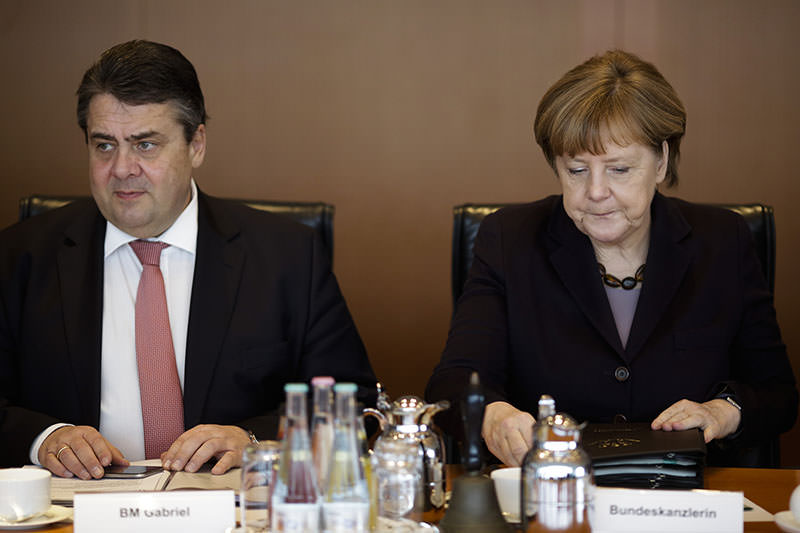 Angela Merkel, (R), sits next to Vice Chancellor and Economy Minister Sigmar Gabriel, (L), as she leads the cabinet meeting in Berlin, March 2, 2016. (AP)
by Mar 06, 2016 12:00 am
German Economy Minister Sigmar Gabriel has branded leading U.S. Republican presidential candidate Donald Trump a threat to peace and prosperity while Chancellor Angela Merkel said it had always been a pleasure to work with Democrat Hillary Clinton.

The comments by Gabriel, Germany's vice chancellor and leader of the Social Democrats, are the clearest sign yet that ruling politicians in Europe are increasingly worried about the outcome of the U.S. presidential elections.

"Whether Donald Trump, Marine le Pen or Geert Wilders - all these right-wing populists are not only a threat to peace and social cohesion, but also to economic development," Gabriel told Welt am Sonntag newspaper in an interview published on Sunday.

Gabriel said that Trump and French National Front leader Le Pen were promising voters "a way back into a fairytale world" in which economic activity only happened within national borders but that history had shown such isolated economies had no prospect.

"We have to make the effort to explain how we want to shape globalisation in a fair way," Gabriel said.

Politicians in Germany and elsewhere in Europe have watched nervously as businessman and reality TV star Trump has moved from long shot to front-runner of the Republicans seeking the party's nomination ahead of the Nov. 8 presidential election.

Trump has described Merkel's welcoming policy towards refugees as "insane" and predicted it would cause rioting in Germany.

He has also praised Russian President Vladimir Putin, who has been at odds with Europe since Moscow's annexation of Ukraine's Crimea region two years ago.

Merkel told Bild am Sonntag newspaper in an interview she did not know Trump personally. When asked about his attacks against her refugee policy, the chancellor said: "I don't see any reason why I should reply to him."

"I value her strategic thinking and that she is a strong supporter of the transatlantic partnership. Whenever I had the chance to work together with Hillary Clinton, it was a great pleasure."

Germany does not face a federal election until next year. But a new anti-immigrant party, the Alternative for Germany (AfD), has emerged as a threat to Merkel's conservatives. The AfD wants Germany to shut its border to migrants and use force to repel them if necessary.