Thousands of migrants stranded at Greek border in unsanitary conditions 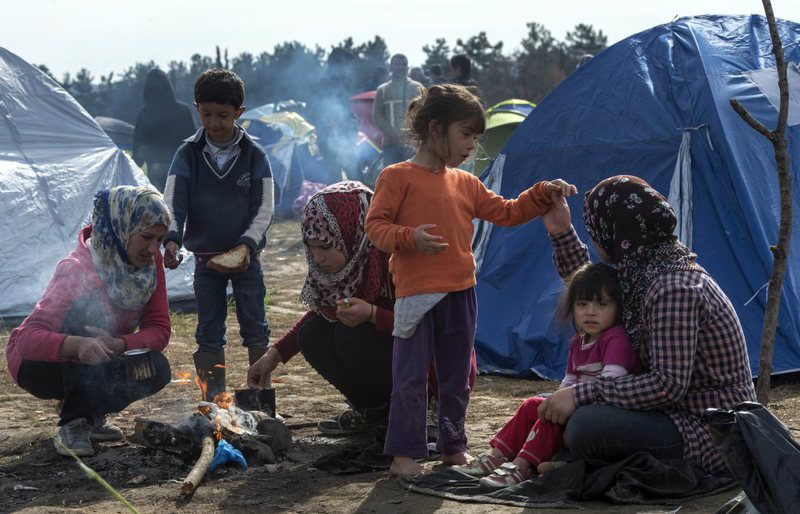 Refugees wait to enter Macedonia among tents in a migrant camp at the Greek-Macedonian border near Idomeni in northern Greece on March 6.
by Daily Sabah with AFP Mar 07, 2016 12:00 am

Humanitarian aid groups have sounded the alarm, as the number of stranded migrants at the closed Greek-Macedonian border rises, saying many live in unsanitary conditions. A local governor has called on the government to declare a state of emergency in the region

Some 14,000 migrants are trapped in unsanitary conditions on the Greek border with Macedonia, officials said Saturday, with all eyes on a key EU-Turkey summit on Monday that is perceived as the only viable solution to the crisis.

The huge influx of refugees and migrants has caused major tensions and divisions within the EU. Greece has found itself at the heart of Europe's greatest migration crisis in six decades after a series of border restrictions -- imposed along the migrant trail from Austria to Macedonia – has caused a bottleneck on Greek soil.

More than 30,000 refugees and migrants are currently trapped in the country, nearly a third of which are located at the Idomeni border crossing, where aid groups have reported food and tent shortages.

Greece sent its army to speed up the reaction of open camps for migrants and refugees in February but has occasionally run into opposition from local authorities.

Aid groups have sounded the alarm on the shortage of food and tents, as well as deteriorating living conditions amidst declining hygienic conditions. On Saturday, Doctors Without Bordersbegan erecting additional tents at Idomeni to shelter more than 1,000 people who could not fit in the camp and have been sleeping in muddy fields and ditches, an Agence France-Presse (AFP) reporter said.

In past days, the refugees – mainly Syrian and Iraqi – have regularly held protests in front of the barbed-wire fence which is guarded by Macedonian riot police, demanding that they be allowed to cross the border. "We are calm now because we are hoping for a positive outcome on Monday, that they will help us pass this border point," Hussam, a 25-year-old Syrian, said. "If there isn't one, I don't know what will happen."

"I haven't bathed in 15 days," said Almuthanna, a 35-year-old Iraqi who has been stranded at the camp with his family for eight days. "One of my sons is ill and there's no medicine. This is war too, only they don't kill you with a gun – they [kill you] slowly," he told AFP. "We hope the politicians will reach a solution on Monday. Hope is all we have left. It will be disastrous if no solution is found," he said.

Greece has asked the EU for 480 million euros in emergency funds to help shelter 100,000 refugees. A senior U.N. migration official has warned that the number of refugees currently stuck in Greece will probably reach 70,000 in the coming weeks.

Greece is likely to receive another 100,000 migrants by the end of the month, Europe's migration commissioner warned on Saturday. As EU members continued to bicker, Dimitris Avramopoulos, the official in charge of migration at the powerful Brussels executive, pointed to upcoming measures, including an overhaul of asylum rules, to help ease tensions. "Hundreds are arriving on a daily basis, and Greece is expected to receive another 100,000 by the end of the month," Avramopoulos said during a conference in Athens. "In a few weeks," the EU will announce a revision of its asylum regulations to ensure a "fairer distribution of the burden and the responsibility," Avramopoulous said.

The majority of migrants come from the Middle East and Africa. The turmoil in the Middle East and the five-year civil war in Syria have led many people to flee the conflict in an attempt to seek security and shelter in a more prosperous and peaceful country, such as those in Europe. However, Europe has been slammed for lacking a collaborative response to the crisis as a series of border crackdowns have left thousands of migrants stranded at the borders.
RELATED TOPICS