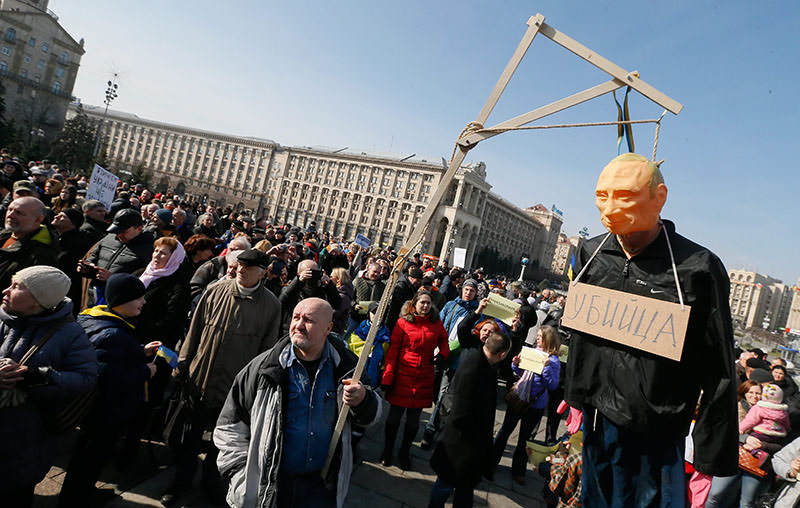 Protester holds a symbolic gibbet with an effigy of Putin and plate on it breast reading like 'Killer' during their rally in downtown Kiev, Ukraine, 06 March 2016 (EPA).
by Mar 07, 2016 12:00 am
Angry protesters threw stones and eggs at the Russian embassy in Kiev Sunday, breaking several of its windows, after earlier smashing cars and throwing smoke pellets as Ukrainians' anger boiled over at Moscow's refusal to free a hunger-striking pilot.

Hundreds of demonstrators rallied outside Moscow's diplomatic mission to demand the release of Nadiya Savchenko, a 34-year-old pilot who is on trial in Russia for the killing of two journalists.

Savchenko began a hunger strike on Thursday, rejecting both food and water, to protest delays in her controversial trial.

The protesters in Kiev also attached a makeshift gallows to the embassy fence, hanging an effigy of Russian President Vladimir Putin with a sign "murderer," an AFP correspondent reported.

Several embassy windows were broken during the protest.

The incident came after some 10 people attacked the mission overnight, smashing several cars, apparently with a hammer, officials said. Grishin said they had also thrown flares and smoke pellets.

Ukrainian police said a "hooliganism" probe had been opened over the nighttime attack.

Earlier Sunday more than a thousand people turned up on Kiev's iconic Maidan square, shaming Putin and praising the pilot.

Savchenko is demanding to be repatriated to Ukraine after a judge in the southern Russian town of Donetsk on Thursday unexpectedly postponed her final address to court as her trial nears its end.

Savchenko is seen by her compatriots as a symbol of resistance against the Kremlin, accused of fuelling a conflict in eastern Ukraine which has claimed more than 9,000 lives since April 2014.

Prosecutors argue that Savchenko was involved in the killing of two Russian journalists in eastern Ukraine in 2014 in her capacity as a volunteer in a Ukrainian battalion.

She denies the charges and says she was kidnapped and smuggled into Russia.

Her supporters are concerned that by refusing to drink water she may damage her health irreparably or not live long enough to attend the next hearing set for Wednesday.

At Sunday's gathering on Maidan square, some demonstrators held up the pilot's portrait, while others carried placards reading "Free Savchenko".

Savchenko's sister Vira, who attended the rally with their elderly mother, said it was hard for Ukrainian President Petro Poroshenko to fight "such a mean enemy that is the Kremlin".

"Nadiya went all in. This is not a bluff and not a political project," she said about the hunger strike.

Viktoriya Ivanenko, a 33-year-old university lecturer at the rally, expressed fears that the aviator may die.

"For me Savchenko is the face of Ukraine's liberation struggle and resistance."

In Russia, one of Savchenko's lawyers, Nikolai Polozov, said she was in "satisfactory condition."

Writing on Facebook, he said she was being monitored and there was no need to force-feed her.

Refusing both food and water is known in Russia as a "dry hunger strike" and was a method of last resort for some Soviet dissidents under Communism.

Polozov said that Russian human rights ombudsman Ella Pamfilova had informed Savchenko's sister Vira of her condition after her representatives visited her in a detention centre.

Savchenko has fasted in the past to protest the accusations against her but has never before refused both food and water.

Irena Lesnevskaya, the founder of Russia's liberal REN TV channel, took to Facebook to urge Putin to release Savchenko ahead of March 8 when Russia and Ukraine celebrate Women's Day, a public holiday.

"Even if you consider a Ukrainian officer defending the sovereignty of her country an enemy, respect an enemy!" Lesnevskaya wrote.

Putin's spokesman Dmitry Peskov declined this week to comment on Savchenko's hunger strike, saying the issue was not on the Kremlin agenda.
The US State Department has reiterated its call for Savchenko to be released "immediately."
Last Update: Mar 07, 2016 12:17 pm
RELATED TOPICS