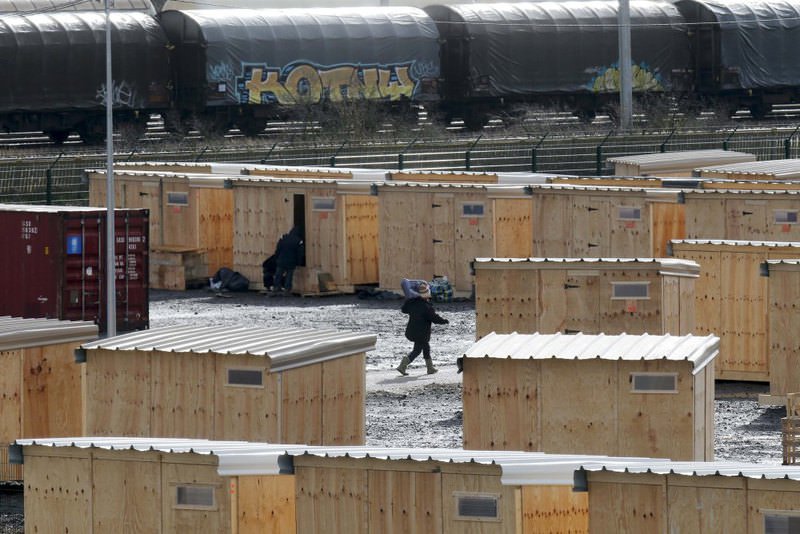 Migrants arrive at a refugee camp with wood humanitarian-standard shelters in Grande-Synthe near Dunkerque in northern France on March 7.
by Daily Sabah with Wires Mar 09, 2016 12:00 am

France's first refugee camp meeting international standards opened amid pressure and tensions. Rights groups have blasted the French government several times due to miserable conditions in other refugee camps such as those in Calais

Three Iraqi Kurdish families were the first to arrive at the new camp in Grande-Synthe near Dunkirk on the northern French coast, Agence France-Presse (AFP) reported. They came from another site nearby where around 1,000 people have been living in miserable conditions with limited protection from the cold.

Doctors Without Borders (DWB) built the new camp, featuring some 200 heated wooden cabins with proper toilets and showers, with the support of the local town hall, despite opposition from the government.

Cordet had "ordered the mayor of Grande-Synthe to immediately cancel the municipal bylaw" that authorized the opening of the camp against the advice of the municipal safety commission, he said in a statement. He ordered Careme to "without delay take measures to ensure the safety of the occupants, especially at night," to limit the risk of fire. "The safety of people is at stake and one cannot disregard the rules, whatever the humanitarian motives," Cordet said.

The move has frustrated the government, which has been trying to move refugees away from the northern coast and into centers where their movement is more controlled. "The government's policy is not to reconstitute a camp at Grande-Synthe, but to make it go away," Cordet said last month.

The new, 3.1 million euro ($3.4 million) migrant accommodation is thought to be the first in France to meet international standards, and DWB said it hoped soon to have 375 cabins to accommodate 2,500 people.

It lies around 40 kilometers from the largest refugee camp on the outskirts of Calais, nicknamed "the Jungle," which the authorities are gradually demolishing.

A group of children tried to offer white roses to the line of riot police holding back migrants and volunteers as workers resumed the dismantling of makeshift shelters. Thousands of migrants have been living in the Jungle and other smaller camps along the northern coast, desperate to reach Britain where many have family or community ties and see better hopes of gaining employment and education.

Most have turned down offers from the French government to move into heated containers alongside the Jungle, or into accommodation centers elsewhere in France, fearing doing so would end their dreams of reaching Britain.

Unlike these alternatives, the new camp at Grande-Synthe will not restrict the movement of migrants and refugees, DWB said. Some five acres of the Jungle were destroyed last week, and authorities said it could take a month or more to demolish the southern half of the camp.

Last week, clashes broke out between French riot police and migrants as authorities began destroying makeshift shelters in the grim shantytown on the edge of Calais. Police shot tear gas canisters to disperse protesting migrants as around 20 workers moved in to start pulling down the shacks by hand while an icy wind blew under blue skies.

The majority of migrants come from the Middle East and Africa. The turmoil in the Middle East and the five-year war in Syria have led many people to flee the conflicts in an attempt to seek security and shelter in more prosperous and peaceful countries such as those in Europe. The EU, however, has been slammed for lacking a collaborative response to the crisis.
RELATED TOPICS