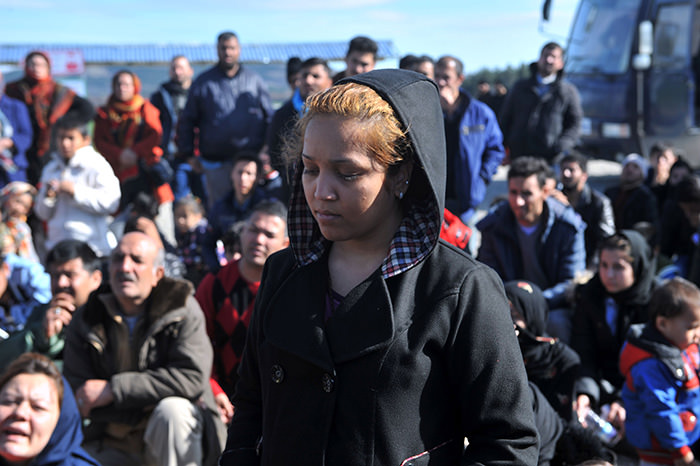 As 34,000 people have been trapped at the Greek-Macedonian border due to border clampdowns by Balkan countries, Slovenia and Croatia also said they would place new restrictions on refugee entries

Slovenia and neighboring Croatia as of yesterday are refusing transit to most refugees through their countries in a bid to seal off the Balkan route used by hundreds of thousands of people seeking a new life in Europe, officials said.

The latest twist in the EU's refugee crisis could set off a domino effect in the Balkan states, with Serbia indicating it would follow Ljubljana's lead and Macedonia apparently set to do the same. The moves to shut down the main route used by the vast amount of refugees hoping to find asylum or better economic prospects in Northern Europe come barely a day after the EU and Turkey agreed to a proposal aimed at easing the crisis.

Slovenia's Interior Ministry said late Tuesday that from midnight local time, access would only be granted to "foreigners meeting the requirements to enter the country," those who want to claim asylum and migrants selected "on a case-by-case basis on humanitarian grounds and in accordance with the rules of the Schengen zone."

Fellow EU member Croatia, which is not part of the passport-free Schengen zone, said it would follow Slovenia's lead and refuse transit to most refugees as of midnight. "Apparently Europe has decided to start a new phase in resolving the refugee crisis. It was concluded that on the Schengen zone borders the Schengen rules would be applied," Croatian Interior Minister Vlaho Orepic told RTL commercial television. Croatia, which had already limited the number of migrants allowed to enter, will now only allow migrants with proper visas. "The border of Europe will be on the Macedonian-Greek border and we will respect the decisions that were made," he said.

More than 1 million people have crossed the Aegean Sea to Greece since the start of 2015, many from Syria, Afghanistan and Iraq, and most aiming to reach wealthy Germany and Scandinavia, causing deep divisions among EU members about how to deal with Europe's worst migration crisis since World War II.

Serbia said that following Slovenia, it would "align all measures with the European Union" and impose the same restrictions at its borders with Macedonia and Bulgaria. Slovenia and Serbia along with Austria, Croatia and Macedonia have dramatically restricted entry to refugees in recent weeks, leaving a bottleneck of some 34,000 stuck at the Greek-Macedonian border, unable to continue their journey. Macedonia said it would only grant entry to the number of refugees that will be allowed to transit through neighboring Serbia and further into Europe.

At talks in Brussels on Monday, the EU agreed in principle to a Turkish proposal to take back all illegal refugees landing on the Greek islands.

Meanwhile, newly arrived refugees in Greece continue to head to Macedonia despite being confronted by a closed border and rain-soaked camps. "This is a transit and not a refugee camp, it cannot support so many people," Cristian Reynders, a coordinator with Doctors Without Borders, told Anadolu Agency.

"Sixty percent of the population here are women and children. On March 4 alone we treated 60 children less than 5 years of age. We deal mostly with respiratory infections and gastroenteritis caused by the poor sleeping and sanitary conditions. People sleep in humidity, under heavy weather." At least 34,000 people have been trapped in various parts of Greece from the cascade of border shutdowns further north that has slowed the numbers reaching Slovenia to a trickle. The last refugees arrived in Slovenia three days ago, according to police there. Nevertheless, the United Nations refugee agency says there are around 1,500 refugees in Macedonia and about 1,000 in Serbia who could be stranded by the new border restrictions.

The majority of refugees come from the Middle East and Africa. The turmoil in the Middle East and the five-year civil war in Syria have led many people to flee the conflicts in an attempt to seek security and shelter in more prosperous and peaceful countries such as those in Europe. However, the EU has been slammed for lacking a collaborative response to the crisis as a series of border crackdowns have left thousands of refugees stranded.
Last Update: Mar 09, 2016 3:13 pm
RELATED TOPICS