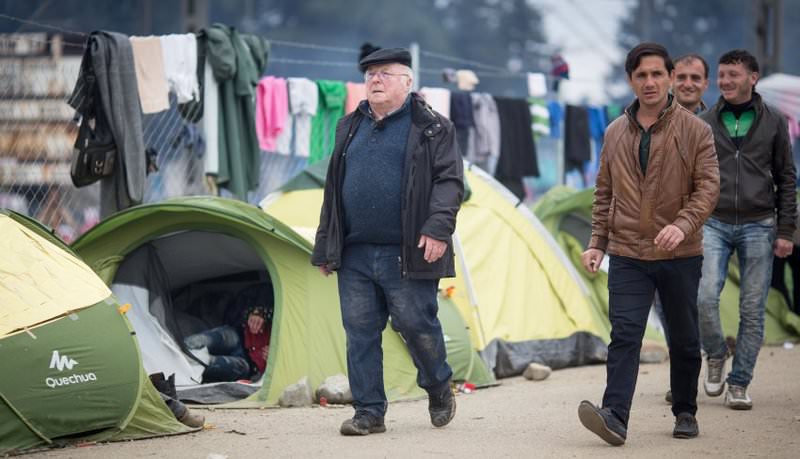 A former German labour minister Saturday set up a tent at Greece's Idomeni refugee camp to express his solidarity with the thousands of migrants stranded on Greece's border with Macedonia.

Norbert Bluem, aged 80, plans to spend the night to Sunday camping outside at the overcrowded camp, where 12,000 people, mostly Iraqis and Syrians, are stranded with little hope of being allowed into Macedonia to continue their trek to central or northern Europe.

An estimated 40,000 migrants have become stranded in Greece as a result of border closures further along the so-called Western Balkan route to wealthier countries in northern Europe.

Around 12,000 of those people are thought to be living in Idomeni, which has become a symbol of Europe's inability to cope with the refugee crisis.

"This kind of brutality is not worthy of European culture," Bluem, who was Germany's labour minister from 1982 to 1998, told a dpa reporter at the camp.

He criticized the miserable living conditions as "an assault on humanity."

A member of Chancellor Angela Merkel's Christian Democrat Party, the former minister lashed out at Austria and other states along the Western Balkan route for their unilateral decisions to seal off borders.

"What kind of solution is that? They sit back comfortably and say Greece should deal with it," he said.

On visiting tented accommodation at Idomeni Saturday, Bluem was greeted by crowds chanting "Thank you, Germany."

Under Merkel's lax migration policy, Germany received 1.1 million asylum seekers in 2015 and thousands continue to arrive despite pressure on her government to limit the numbers.