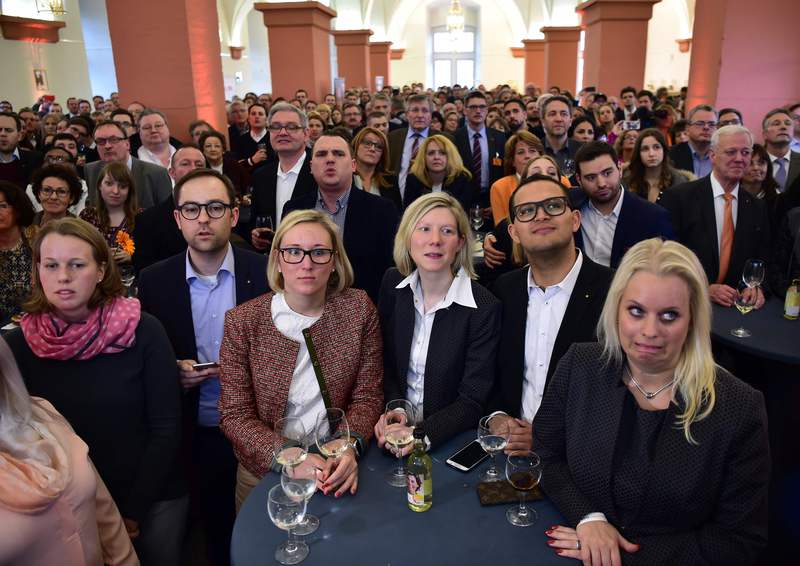 The CDU could only win 26.9 percent, down from 39 percent in 2011, while opposition Green Party was heading for a historical victory, increasing its support to 32 percent, up from 24.2 five years ago.

Social Democrats won only 12.8 percent of the vote in Baden Wuerttemberg, down from 23.1 percent in 2011. In the eastern state of Saxony-Anhalt, they lost more than 10 points, and could only win 11.5 percent.

Germany's anti-refugee movement Alternative for Germany (AfD) entered regional parliaments in all three states that went to polls Sunday, but failed to win control of any of the regions.

In the eastern state of Saxony-Anhalt, AfD secured a historical win, gaining a record 24 percent, becoming the second political force in the state.

In Baden Wuerttemberg, AfD won 12.5 percent of the vote, in the southern state of Rhine-Palatinate, it won 10.9 percent, according to the exit polls.

Sunday's elections were widely seen as a test of support for Merkel's handling of refugee crisis and her open-door policy for asylum seekers; AfD's big gains are likely to increase pressure on the German chancellor. ?

The EU's largest economy took in a record 1.1 million refugees last year and the numbers have put a strain on local authorities, triggering anti-refugee sentiments.

Merkel has so far dismissed calls for setting an upper limit for refugees or closing borders, and argued that a solution to the current crisis can only be achieved through closer cooperation between the EU and Turkey and by EU members agreeing to share the burden.