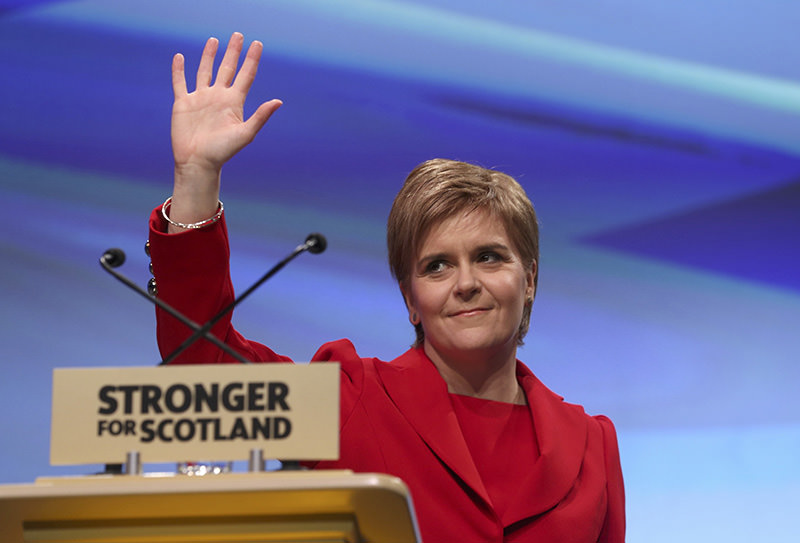 Scotland's leader says she doesn't want to use a possible British vote to leave the European Union as leverage to achieve independence. But First Minister Nicola Sturgeon concedes that Scots' secessionist spirits would be inflamed if English voters forced them out of the EU.

Sturgeon spoke Sunday on the second day of her Scottish National Party's spring conference, which is focused on strengthening nationalist control of Scotland's Parliament in a May 5 election.

She linked the United Kingdom's June 23 referendum on EU membership to her party's ambition to stage a second referendum on ending its political union with fellow U.K. members England, Wales and Northern Ireland.

A poll published in the Scotland on Sunday newspaper provided new indications that Scotland's case for independence would be revived if the United Kingdom as a whole voted to leave the European Union.

When Scotland voted on independence in September 2014, a majority 55.3 percent chose to maintain the 307-year-old union with England.

Sunday's published poll data suggested that Scottish voters appear much more enthusiastic than their English neighbors about staying inside the 28-nation bloc, with 50 percent planning to vote "yes" to Europe, 35 percent "no." That contrasts with several U.K.-wide polls this month that put pro- and anti-EU camps in a virtual tie.

When asked whether they would support Scottish independence in the event of a British rejection of EU membership, 49 percent said they would and 43 percent wouldn't.

The survey of 1,000 registered voters across Scotland questioned last week by pollsters ICM had a three-point error margin.