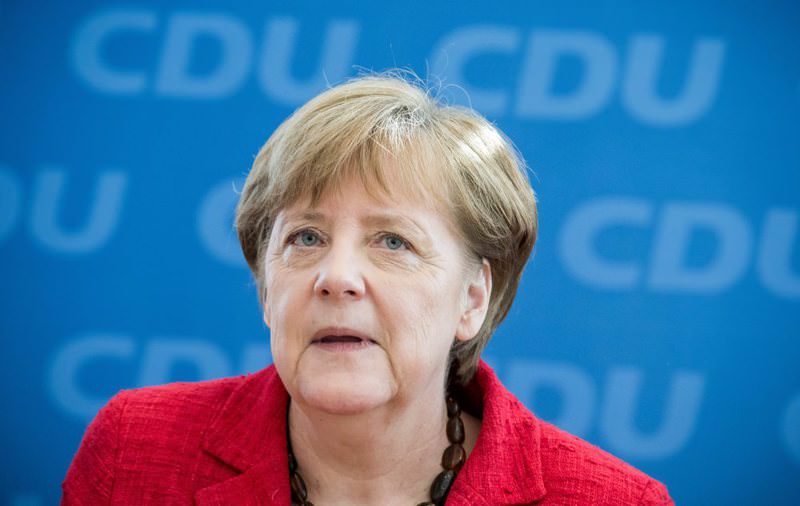 CDU chairwoman and German Chancellor Angela Merkel speaks at a meeting of the Federal Executive Committee of the CDU at Konrad-Adenauer Haus in Berlin, Germany on March 14.
by Daily Sabah with Wires Mar 15, 2016 12:00 am

Facing pressure over her open-door refugee policy, Merkel's party suffered defeats in Sunday's elections while anti-immigration party AfD made strong gains, but vowed to stick to her migrant policy and will keep pushing for an EU- wide solution to the crisis

German Chancellor Angela Merkel said Monday her conservatives' poor showing in German state votes on Sunday marked a difficult day for the party, but she vowed to keep pushing for a Europe-wide solution to the migrant crisis that dominated the elections.

Merkel's Christian Democratic Union (CDU) was at the receiving end of voter anger, suffering defeats in two out of three states in Sunday's elections - including in its traditional stronghold Baden-Wuerttemberg. 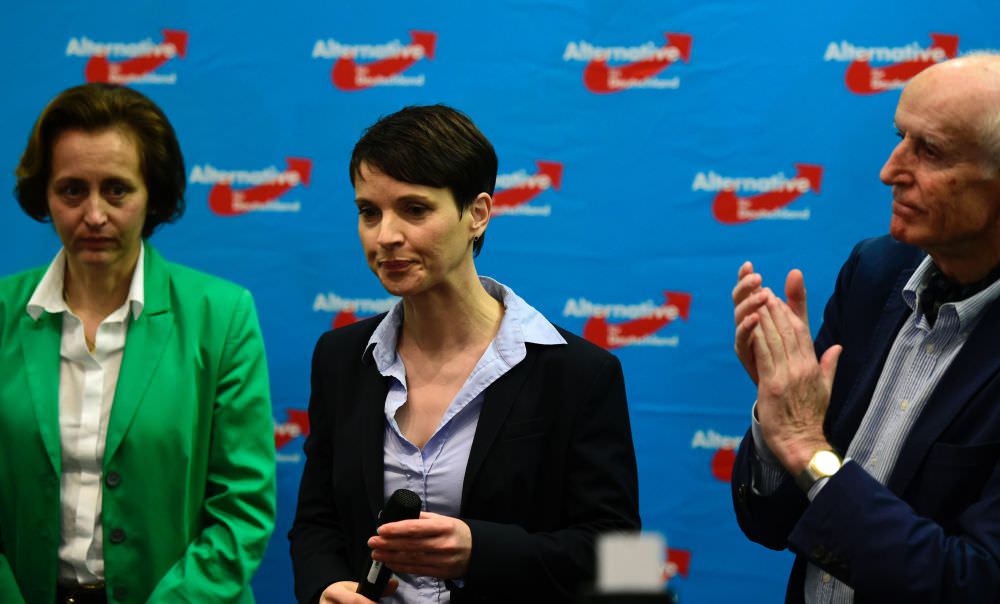 The stinging result for the conservative CDU was accompanied by a surge in backing for the right-wing populist Alternative for Germany (AfD), which had sparked outrage by suggesting police may have to shoot at migrants to stop them entering the country.

However, Merkel stood firm yesterday on her liberal refugee policy, despite the results. "The federal government will stay the course on its refugee policy, fully determined, at home and abroad," the spokesman, Steffen Seibert, told a news briefing. "The goal must be a common, sustainable European solution that leads to a tangible reduction of the number of refugees in all (EU) member states."

Only founded in 2013, the AfD secured a dramatic 24.3 percent of the vote in the economically hard-pressed eastern state of Saxony-Anhalt, and is set to enter the parliaments of the wealthy south-western states of Baden-Wuerttemberg and Rhineland-Palatinate. "We are on the road to victory," AfD national leader Frauke Petry declared to jubilant party members following the elections.

AfD's poll ratings stood at about 5 percent nationally in the middle of last year but more recently has jumped to about 10 percent in the wake of the refugee crisis that emerged in Germany in September.

The elections were the biggest since Germany registered a record influx of refugees that reached 1.1 million in 2015, and largely regarded as a referendum on Merkel's decision to open the doors to people fleeing war. While they have no direct impact on her chancellorship, the regional polls in the southwestern states of Baden-Wuerttemberg and Rhineland-Palatinate as well as Saxony-Anhalt in the east served as a key test ahead of general elections in 2017.

The mass-circulation Bild newspaper described it as a "day of horror" for Merkel. The main reason for the poor CDU showing "is the refugee policy. It makes no sense at all," CSU chief Horst Seehofer said at a party meeting on Monday, according to national news agency DPA. Demanding a change in refugee policy, Seehofer said: "It can't be that after such an election result, the answer to the electorate is: everything will go on as before."

Merkel has criticized a decision by Balkan states to close their borders to refugees, but Bavarian daily Nuernberger Nachrichten noted that "she is benefiting more than anyone from the border closures that she is criticizing." "After this election, Merkel must, more than ever, give an explanation." The German press said the results delivered a clear message to Merkel. "The grand coalition on Sunday received the bill for its refugee policy, which has polarized Germany," the Frankfurter Allgemeine Zeitung said. Spiegel Online described it as "Black Sunday for the CDU." "For a long time (Merkel) had hoped, despite all the opposition to her refugee policy, to grab the two state premierships in the southwestern states. That's not happening," Spiegel said in an editorial. "Merkel will now have to live with the accusation that she has allowed the AfD to establish itself to the right of the CDU."

For most of the last decade, Merkel has enjoyed stellar popularity ratings as she pushed a middle-ground politics. Although her strategy has allowed her party to win over some ground from the centre-left Social Democrats, critics say it has left its right flank exposed.

In Sunday's vote, the AfD captured seats into all three states and gained as much as one in four votes in the eastern state of Saxony-Anhalt, emerging as the second biggest party. In Rhineland-Palatinate, it rose to become the third largest.

Nevertheless, the irony is that Sunday's polls also once again showed there is no obvious successor to Merkel, as the CDU's biggest mainstream challenger and junior coalition partner - the Social Democratic Party - was severely weakened, coming in behind AfD in two out of three states. And Julia Kloeckner, who some believed could be the successor to Merkel, failed to help the CDU to a win in Rhineland-Palatinate. Even Seehofer acknowledged that Merkel was still the right chancellor, while the Frankfurter Allgemeine Zeitung questioned who had the clout to force the German leader to reverse her stance on refugees. "The party has less choice than ever" for its succession, it noted.

Finance Minister Wolfgang Schaeuble, known for being a straight-talker, simply described AfD as a "shame for Germany". "Until now, right-wing populist or extreme-right parties are considered taboo, considered like aliens in the political sphere," said German political analyst Wolfgang Merkel in a interview with Tagesspiegel daily. But the analyst believes that the taboo surrounding such right-wing populism could be soon shattered.

The vote for AfD underscored the lurch to the right across Europe amid sluggish economic growth, high unemployment and more recently a mass influx of refugees into the region. Germany has been another example of a recent shift across Europe towards right-wing parties, which have been gaining popularity amid rising public fears regarding the refugee influx. Recently, the polls indicated a rise in support for right-wing parties in France, Austria, Poland and Switzerland.