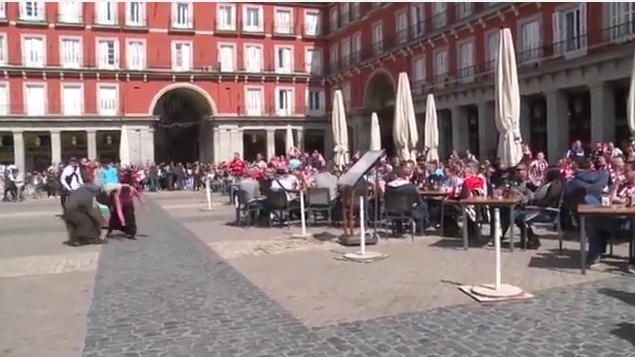 A Youtube video that shows the Dutch football team PSV Eindhoven fans throwing change money to refugees has gone viral on social media, drawing ire against the fans for their behavior towards the refugees.

The video shows the fans throwing money from the patio of a bar at the Plaza Mayor in Madrid, Spain ahead of a game between Atletico Madrid and PSV Eindhoven.

The fans chant and make fun of the refugees as they pick up the change thrown at them from the ground.

The civil war in Syria has made Turkey a favorite destination for Syrian refugees, who use it as a launching pad for journeys to Europe. Most refugees prefer sea routes due to the proximity of Turkey's coast to the Greek islands, but others prefer a land route from the northwest. Turkey is home to more than 2.5 million refugees from Syria where a five-year civil war has displaced millions.

Although the Aegean route is a shortcut to Europe for refugees, it is also probably the deadliest. Refugees are often forced to travel in shoddy, overcrowded boats and rafts with cheap life vests unable to keep them afloat if their boats sink. Strong winds on the Aegean Sea add to the dangers of the journey, although the onset of spring, which brings less severe winds, is expected to lead to a renewed influx of refugees who mostly stayed away from the beaches in the past months.

Since January, the Turkey's Coast Guard has intercepted 14,388 refugees on the Aegean Sea and 141 people have died en route to the Greek islands. The International Organization for Migration (IOM) says more than 125,000 people arrived in Greece from the Eastern Mediterranean route, which includes the Aegean Sea, since Jan. 1, 2016.