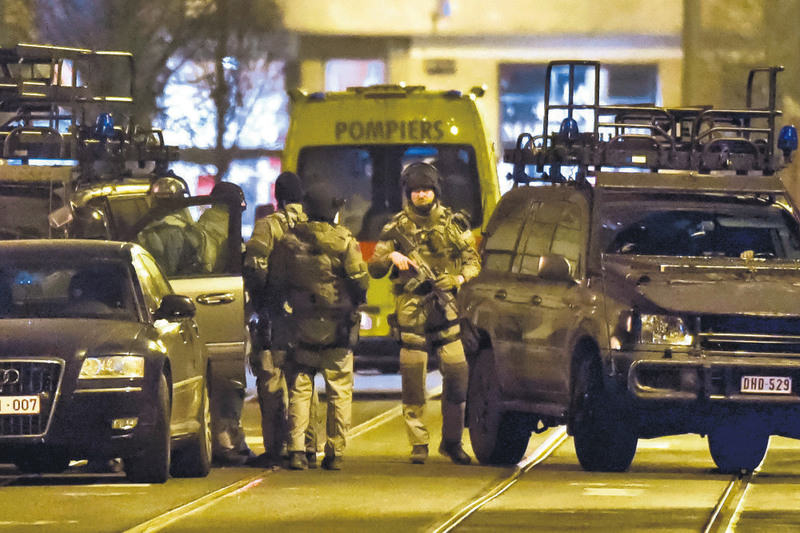 Belgian police found a DAESH flag next to the body of an Algerian killed during a raid in Brussels, investigators said Wednesday as they raced to track down two suspected extremists who escaped.

In Paris, meanwhile, French police said they had arrested four suspected extremists, one of whom was believed to be plotting attacks, and President Francois Hollande urged the public to be vigilant.

Belgian investigators named the fatality in the Brussels operation as Mohamed Belkaid, 35, an Algerian national living illegally in Belgium, who was killed by a police sniper while trying to fire at police during a chaotic gun battle.

Two suspects were still at large after the bloodshed, which erupted as Belgian and French police searched a property in connection with the Nov. 13 Paris massacres, claimed by DAESH, in which 130 people died. Belgian Prime Minister Charles Michel said authorities had decided to maintain the country's terror alert at the second-highest level of three, "which means a threat is possible and likely."

Brussels was locked down and the alert level raised to the highest of four shortly after the Paris attacks, but it was lowered back to three a few days later, although troops remain outside many key sites.

Prosecutors said at least two armed suspects fired on police as the door was opened during a search of the property in the quiet Forest district in southern Brussels, wounding three officers including a French policewoman. After hours of gun battles in which a fourth officer was hurt, a suspect was "neutralized by a sniper of the special forces when he tried to open fire from the window of the flat", spokesman for the prosecutors Thierry Werts said.

"Next to his body was a Kalashnikov, a book on Salafism and a DAESH flag," Werts told a press conference. Eleven magazines of ammunition for Kalashnikov assault rifles were also found Belkaid was unknown to Belgian authorities except for a case of minor theft in 2014, they said.

A second Kalashnikov and black clothes were found abandoned at a house nearby but searches throughout the southern district of Brussels for the two men yielded "no results," he said. Two suspects arrested in connection with the case, including one found in hospital with a broken leg, were later released without charge, prosecutors added. Belgium has been at the center of the investigation into the Paris attacks almost from day one. Key Paris suspect Salah Abdeslam fled to Brussels after the attacks and is believed to have holed up in a flat for at least three weeks. He remains on the run while his brother blew himself up in the massacre.

The ringleader of the attacks, DAESH member Abdelhamid Abaaoud, was also from Brussels. He was killed in a raid in Paris in November.

Both had links to the largely immigrant Brussels district of Molenbeek which was targeted by authorities after the attacks. Meanwhile in Paris four suspected extremists were arrested Wednesday, one of whom was thought to be planning "violent acts," French Interior Minister Bernard Cazeneuve said. "This individual may have been in contact with individuals in Syria belonging to DAESH," Cazeneuve said.

Cazeneuve downplayed reports that the attack had been "imminent" and said the authorities "carry out arrests of this kind every day." Hollande, though, called for the public to exercise "the greatest vigilance." "The threat level remains very high," said Hollande.