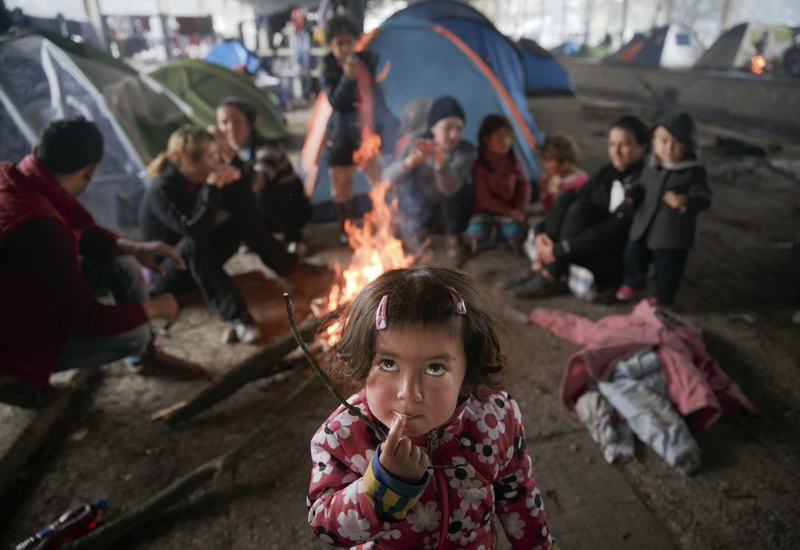 A child eats as others sit around a fire in a railway repair hangar where people have set up their tents at the northern Greek border point of Idomeni on March 18. (AP Photo)
by Daily Sabah with Wires Mar 19, 2016 12:00 am

After being stuck in Greek border camps for more than 10 days, desperate refugees have described conditions in Idomeni as ‘hellish' and are now applying for the EU's relocation scheme, which has so far been unsatisfactory

Ten days in the squalid Greek border camp of Idomeni were enough to convince Adel to put his dreams of dashing to Germany on hold and apply for the EU's refugee relocation scheme.

"It was unbearable," says the 20-year-old finance student from Aleppo, one of a growing number of Syrian and Iraqi refugees who are expressing an interest in the sharing-out program that until now appeared stalled. Adel is among a hundred-odd Syrian and Iraqis currently lodged at Hotel Edelweiss in Livanates, a coastal town nearly 150 kilometers north of Athens.

A family hotel, the Edelweiss is part of a program run by the U.N. refugee agency to accommodate 20,000 refugees eligible for relocation after being trapped in Greece by a domino effect of border closures along the migrant trail to northern Europe. "Last week we had 650 applications compared to barely 100 in February," says Jean-Pierre Schembri, a spokesman for EASO or the EU's European Asylum Support Office.

EASO has doubled its presence in Greece, deploying 60 staff on the islands, the port of Piraeus and refugee accommodation camps around the country. The goal, says Schembri, is to limit the waiting procedure to a maximum of two months, otherwise the refugees will lose interest and turn to smugglers for help. Out of the 63,000 mainly Syrian and Iraqi refugees supposed to be farmed out from Greece in the space of two years, only 569 have been accepted by fewer than half of the EU's 28 member states. Hardline states including Hungary, the Czech Republic, Poland and Slovakia have flatly refused to take any refugees.

Until last month, Syrians and Iraqis were permitted to travel through Greece and reach family members in Germany, Scandinavia and elsewhere. Many Syrian and Iraqi men took advantage of this option and forged ahead, frequently leaving behind their wives and children to follow at a later stage.

But amid a raging debate in the EU over how many more refugees to accept after over a million people arrived from camps in Turkey in 2015, Macedonia and other Balkan states shut their borders to all exiles last week, trapping over 45,000 people in Greece. Around a third of them are massed at the Greek border post of Idomeni, where a makeshift camp initially planned for 2,500 people now holds over 14,000.

Refugees have described conditions at Idomeni as "hellish." Recurring rains have turned the overflowing camp into a quagmire. Thousands sleep in tiny tents in muddy fields and ditches and queue for hours just to get a sandwich. Conditions at the Edelweiss are a huge improvement. The refugees have clean beds and warm meals, but time seems suspended for the refugees as they await news on their asylum applications. "We eat, we sleep, we grow tired," says Adel.

Besides a stroll by the sea, and watching the children play, there is little to do. "There has been no information at all. We've been here a week and no one has contacted us," says Amina Khalaf, a 37-year-old who escaped Aleppo with her husband and two daughters after she was hurt in a bombardment.

"I'm afraid that more people will apply for the program and that suddenly, there will no longer be room for us," says Zahraa al-Bayati, a 40-year-old mother of three from Iraq. "They may well forget about us here," she adds as around 40 children shout and run about.

The relocation plan is designed to help people fleeing the mainly Muslim war-torn countries of Syria and Iraq, as well as the repressive east African state of Eritrea. In the wake of attacks like the Paris massacre, officials working on relocation said that France, Belgium, and Sweden were leading a "misplaced" push for stricter checks to weed out extremists from the bona fide refugee. The turmoil in the Middle East and the five-year-long civil war in Syria have led many people to flee regional conflicts, in an attempt to seek security and shelter in more prosperous and peaceful countries, such as those in Europe. However, Europe has been severely criticized for lacking a collaborative response to the crisis.