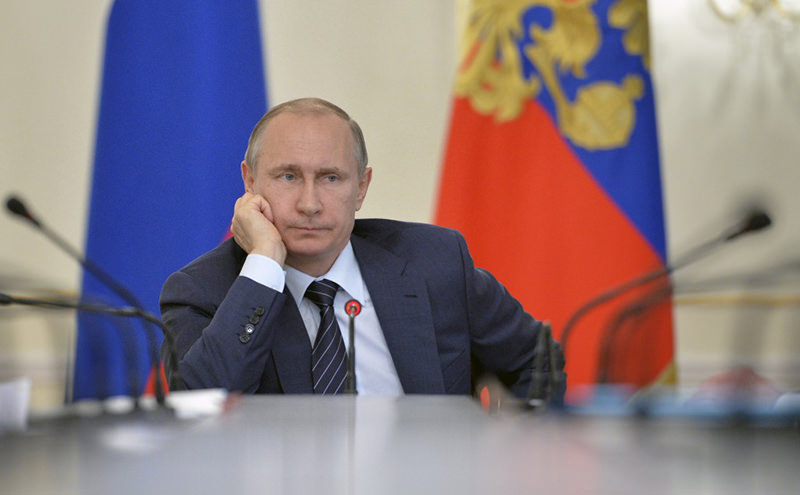 Vladimir Putin's trust rating among ordinary Russians has fallen by 10 percent in the past year even though the numbers who want to see him re-elected as president have grown, two opinion polls showed on Monday.

According to one poll, by the independent Levada Center, 73 percent of voters said they trusted Putin, down from 83 percent in the same polling series a year before, while 19 percent said they did not trust him, up from 14 percent.

The pollster did not offer an explanation for the apparent slip in Putin's trust rating, which remains stratospheric by Western standards.

He has capitalised on conflicts in Ukraine and Syria to boost his popularity and his message that Russia is again a force to be reckoned with on the world stage has gone down well with voters.

However, the Russian economy is in a sharp slowdown, made worse by Western sanctions imposed on Russia over the Ukraine conflict, and millions of Russians have seen their household income fall in real terms.

Liberal opposition politicians say any polling data concerning Putin is unfairly boosted by the fact that state TV, where most Russians get their news, affords Putin blanket and favourable coverage while largely ignoring them.

Putin is widely expected to contest the next presidential election in 2018. If he won, it would be his fourth term as president.

Another Levada poll, conducted last month, suggested more Russians were ready to re-elect Putin now than a year ago, despite his falling trust rating.

That poll said 65 percent of Russians said they wanted to see Putin re-elected as president, up from 57 percent in the same polling series the year before.

A survey by a state-run pollster earlier this month gave him sharply higher numbers, suggesting that public support for Putin to serve another term as president had hit its highest level in four years.

The first Levada poll was conducted from March 11-14 and surveyed 1,600 Russians across the country. The second poll was carried out from Feb. 19-24 with the same number of voters.